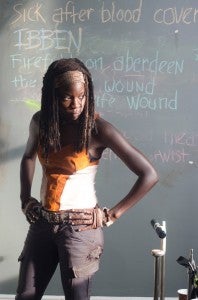 While the episode itself left a bit of an odd taste in our mouths, The Walking Dead's "Clear" was without a doubt chock full of some cool imagery, fun moments and great character beats.

We got to see what made the character of Michonne special beyond just "she can kick your ass," and to reconnect with Morgan Jones, arguably the character most requested to return after Merle Dixon (who's back as a regular this season). We also finally got to see Rick be the sane man in the room--something that hasn't happened all year long, really, and that was sorely missed. Something needed to happen, after all, to establish that he still had a tether to reality otherwise it simply wouldn't be believable for him to survive--much less win--in an encounter with the Governor.

So, what were our favorite moments of the episode?

For those of us who steered clear of the ads, and didn't know he'd be appearing this week, we got a feeling when Rick revealed that they were in his hometown that maybe we'd reconnect with Morgan. He'd been teased and promised by the production staff for a while now, and while we weren't sure it would be this episode, the moment Rick revealed that the gunshot victim was wearing body armor, it seemed pretty clear that the character was important enough to save--and that it was likely to be Morgan.

Still, when the helmet came off and Rick saw his old friend, you got a double-shot of excitement, at the sight of Morgan and again at the sight of Rick having one of his delusions finally vindicated by an audience that could see what he was seeing.

Come on, be honest--there's not a Walking Dead fan out there who hasn't beeen waiting for someone to finally stand up and say, "Carl, you're a freaking kid. You stand here, you shut up, you do what you're told so that you don't get yourself and me too killed." That his mother was perpetually incapable of doing this was one of the main reasons so many fans made fun of Lori.

Michonne, though, steps into that role nicely and does so in a way that respects Carl as a character but tells him it's time to stop pretending this is a game, and stop being irresponsible. There's a way to do things that is both workable and safe, and the fact that Carl is so often willing to opt for one or the other rather than both is a problem. Looks like we FINALLY found an adult around who has a solution.

Moments later, though, she's in and out and really establishes again what a bad-ass she is. It took them a couple of minutes to sneak in, find something they KNEW how to locate and sneak back out--during which time they drew a crowd and lost their objective. Michonne took about 40 seconds to sneak in, find something she knew how to find, something she didn't know how to find and sneak out, all in silence, all without distracting the walkers who clawed at the door where Carl was standing guard.

And the way she delivered the line about the ugly sculpture was poetry. Danai Gurira has chops. 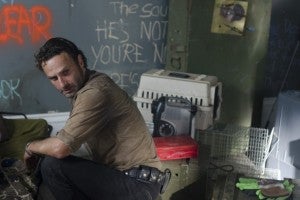 Morgan Snaps Out of It

The moment Morgan told Rick that he wasn't going back because he could see that Rick was preparing to go to war with another group, and that the prison was no safer than where he was, it really became clear that he wasn't divorced from reality.

We haven't seen that big, dramatic moment for Rick yet; he drifts in and out of reason so quietly that it's often disconcerting when he starts to babble or see things. Morgan, on the other hand, was so completely out of it that there was no way to subtly bring him back to real life. He's working on a pretty stark on/off switch, and when you see him go "on" and realize that there's hope for him yet, it's pretty great--even if he doesn't agree.

We got to see it twice, and each time a little more dramatically than the one before it. When he realized that he knew Rick, it was arguably the emotional high point of the episode. When he realized that he wasn't willing to go along with what Rick had planned, it wasn't quite as sweet a moment...but it was a welcome sign that if he shows up again down the road, he might be salvageable.

I don't mean to be a hater, but--really, last week was a big Andrea week, and her character made some really, really stupid statements and decisions. It was nice to have a break from her.