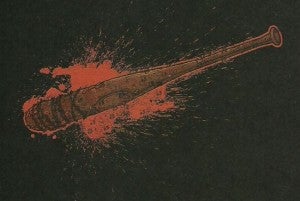 After the “Killer Within” episode where a kid put a bullet in his mother’s head to keep her from becoming a zombie, one might think that The Walking Dead has had its most shocking moment. However, readers of The Walking Dead comic book know that the TV show has only touched the surface of shocking, and there could be a lot more jaw-dropping moments to come.

We’ll include the obligatory warning that spoilers follow, but they're only spoilers in the sense that they happened in the comic books. The TV show doesn’t always follow the comic books, so there’s no guarantee that these scenes will actually happen. In some cases, we sort of doubt they ever will be shown on TV. That being said, here are five shocking moments that could be in The Walking Dead’s future.

Baby Killed - In the comic books, Lori's baby dies, when she is shot in the back and falls on top of the baby. Since Lori is already dead, we know that the baby can't die the same way on TV that she died in the comic books. However, creator Robert Kirkman has gone on record stating that they will kill the baby if it's necessary for the story.

Michonne Raped - The Walking Dead doesn't shy away from violent scenes and a little strong language, but is there a line they won't cross? Even though The Walking Dead is clearly aimed at adult viewers, there's no denying that it has many younger fans. In the comic books, Michonne is raped by The Governor. Would depicting a violent rape be an area where the TV show would not go?

Glenn Beat To Death With A Baseball Bat - In the comic books, Glenn is beaten to death with a baseball bat wrapped in barbwire. Even for the comic books, it was a particularly violent scene. Given that Glenn is one of the fan favorites on the TV show, would Walking Dead producers dare to risk alienating viewers by killing him in a brutal and barbaric way.

Rick’s Hand Cut-Off - We've seen Hershel's leg get cut off with a hatchet, so we know Walking Dead producers aren't shy about showing amputations on the show. In the comic books, The Governor cuts Rick's hand off. Would the TV show actually be willing to cut the hand off the main character?