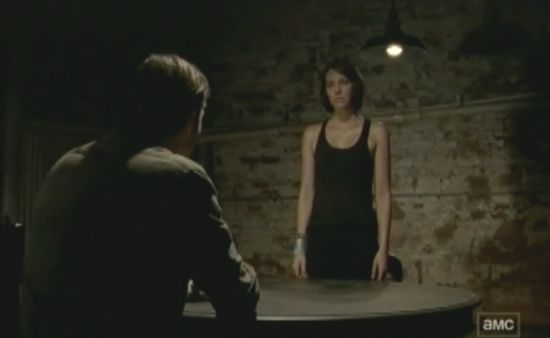 The “When The Dead Come Knocking” episode of The Walking Dead seemed to be a set-up for next week’s mid-season finale. All the pieces were put in place to lead up to what will likely be a climatic confrontation between Rick’s group and the people of Woodbury. Here are our picks for the five most shocking moments from “When The Dead Come Knocking.”

5. Merle Turns Zombie Loose On Glenn – Glenn is tied up to a chair, and Merle turns a hungry zombie loose in the room. We know Walking Dead producers have said nobody is safe, but would they really kill off a fan favorite like Glenn? For a moment, we were expecting another shocking death, but Glenn proves to be very resourceful, and he is able to kill a zombie by breaking up his chair.

4. Michonne Passes Out – After the zombies start to realize Michonne is not one of them, they turn and attack her. Michonne makes a valiant effort trying to fight them off, but she eventually passes out from the blood loss due to her gunshot wound. While it initially looks like it could be the end for Michonne, Rick and Carl fortunately decide to come to the rescue.

3. The Man In The Cabin – Rick and his group get surrounded by zombies in the forest, and they seek refuge in a cabin. However, there turns out to be another survivor in the cabin, but one who surprisingly appears to be unaware of the zombie apocalypse. When the man tries to open the door to the horde of walkers outside, Michonne has to put him down with her katana. Then, Rick and his group feed the man to the zombies in order to make their own escape.

2. Studying The Zombies – Andrea helps Milton with a zombie experiment. They watch an elderly man who has agreed to be a test subject for when he turns into a zombie. They hope to find that he retains some of his memory after becoming a zombie, but that doesn’t turn out to be the case, and Andrea has to kill the test subject.

1. The Governor And Maggie – As part of interrogating Maggie, The Governor threatens to bring her Glenn’s hand unless she takes her shirt off. Maggie complies, and The Governor then is shown taking off his belt, before pushing Maggie to the table. In the end, it looks like The Governor walks away, but his threat is very clear.