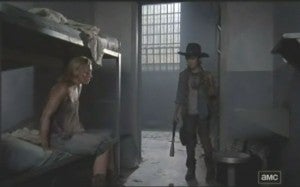 The Walking Dead “Seeds” episode was a fast-paced start to the third season. In between all the zombie killing, there were some very interesting questions raised. Is there romance in the air? Has Rick developed a new treatment for zombie bites? Will we get a pint-sized zombie? Here is our list of the top five questions raised during The Walking Dead season 3 premiere.

5. Is Carl interested in an older woman? – At New York Comic Con, Chandler Riggs (who plays Carl Grimes) hinted that there could be romance brewing between his character and Beth. After entering the prison, Carl looks like he might be considering taking the top bunk in Beth’s cell, before Hershel enters and asks Carl if he has found his cell yet. Of course, Beth is three to four years older than Carl.

4. Is there romance brewing between Daryl and Carol? Daryl and Carol have had a special bond for quite some time. Has that bond lead to romance? Carol certainly appeared to be interested in taking the relationship further. After Daryl massaged Carol’s hurt shoulder, she suggested they get romantic. She played if off as joke, but was she really joking?

1. Will we get a zombie baby? – Lori Grimes raises perhaps the most interesting question of the episode. Since everyone is already infected, does that mean the infection is already passed to her baby? If the baby is stillborn, could it result in a zombie baby? The introduction of a zombie baby would certainly be the shocker of all shockers.

The Walking Dead: Five Questions Raised From The Premiere