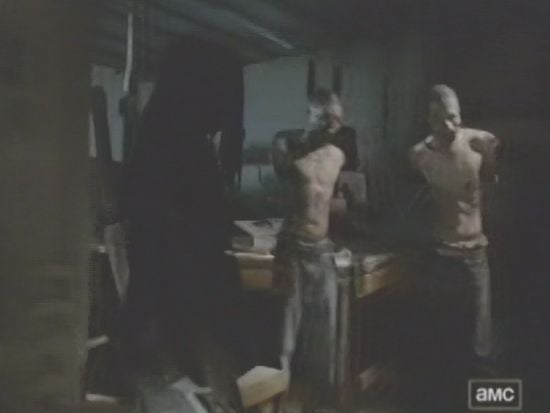 Tonight's season premiere of AMC's The Walking Dead dealt a lot in action. "If you want to talk, go to Hershel," Rick tells his wife at one point in the episode. "I'm doing stuff."

And it's true--most of the episode features Rick, the other male survivors and Maggie Greene stomping through the zombie-infested world they inhabit, kicking ass and taking names.

The episode opens on a couple of familiar scenes--as we saw at New York Comic Con this weekend, Rick and the other male survivors storm a house looking for supplies, taking out walkers as they do so. Finding nothing, Carl takes cans of dog food from under the home's sink--a move that frustrates Rick when the group comes back together.

Seeing a small herd of walkers approaching them, T-Dog gives a sign to the rest of the group, who hustle into their cars and speed off. That leads into the credits, which is followed by the scene where the group stops in the street to examine the maps, but every path seems hopeless. When Daryl and Rick use the downtime to go scout the area, they stumble upon an overlook, at the bottom of which the prison can be seen.

It's not long before the group is there, and Rick devises a plan to whittle the walkers down to a manageable number by closing off a gate that separates two layers of fencing. His thinking is that the survivors will then only have to take out the walkers inside of the outer layer, and not the entire population of the prison. While Glenn tries to volunteer for the task, Maggie calls it a suicide run and tells him no. Rick appoints himself the candidate, instructing the rest of the survivors to take up various positions either distracting or picking off the walkers from outside of the prison's outer fence to make his job easier.

Once Rick gets the gate closed, the group clears out the walkers from the yard, setting the stage for everyone else to follow him in.

That night, around a campfire, Rick tells the group (who are singing and eating) that they need to press on into the prison--that it could be a gold mine with medicine, food and weapons inside. People are hesitant at first, and Lori tries to convince Rick to give the group a few days to camp out and relax before diving in, but Rick tells her that the baby will come any day now.

Meanwhile, there's some pretty clear chemistry developing between Carol and Daryl, with Carol taking most of the initiative.

Next up is the often-teased scene in which Michonne takes out a few walkers.

Back at the prison, Rick has devised a plan to get into the Warden's office, where he assumes there will be keys, a map to find supplies and other essentials. Taking the men into the prison area in a circle formation (along with Maggie again), the group hacks and slashes their way through walkers--until they run into a few former guards in riot gear, who are therefore much more difficult to kill with a crack on the head. Low on bullets, the group is taking on walkers hand-to-hand and while Rick is off closing another gate to pen in a handful of prisoners, Maggie figures out how to kill the walkers by using a long weapon and stabbing up from under their helmet. The group dispatches the rest of them, and they head into the warden's office.

They take keys from the warden, who has apparently committed suicide, and the group heads into a cell block, where they find walkers locked up in the cells and dispatch them. Shortly, they're moving in, with the cell block having been secured (although Daryl refuses to sleep in "a cage" and opts to pull a mattress onto a perch).

There's a brief moment in Beth's cell where Carl seems to have a crush on her, but shakes it off as keeping her safe when Hershel arrives to ask if everything is ok. Then Glenn and Maggie appear to be celebrating getting a bedroom and some new found safety.

Michonne then moves along into a building where her "pets" are chained up, looks around seeming confused or concerned, and finds Andrea huddled on the floor in another part of the building. Andrea, sick and clearly in pain, urges Michonne to move on without her, but Michonne refuses, saying that they'll go together in a couple of days. Andrea replies that if they wait, she will die where they are.

Moments later, the two are heading back out into the woods, Michonne's pets in tow.

Back at the prison, the men are suiting up in their riot gear when Carol calls Hershel away.

Lori tells Hershel that she hasn't felt the baby move and is afraid she may have miscarried. "If we're all infected, then so is the baby," she tells him, and then recites a list of the worst-case scenarios, from the baby clawing its way out of the womb as a walker to Lori herself dying during child birth and attacking Rick, Hershel, Carl or the baby. She makes Hershel promise to kill her and/or the baby immediately if one of those scenarios happens.

She adds that Rick hates her, saying that she put he and Shane at odds, and that she put the knife in Shane's hand. Hershel tells her to calm down and focus on the baby, and then proceeds to see if it's alright.

Rick tells Carl that he can't join them while they're trying to clear another part of the prison in their search for the commissary and the infirmary. He says that they don't know what's in there and that Carl may have to step up and be the man if something happens.

Inside the darkened chamber, there's a long bout of silence before they find the first batch of walkers...but then they're swarmed from a number of directions. When Glenn and Maggie duck into a utility closet to escape some walkers and are separated from the group, Hershel waits until the coast is clear and heads back to find them. He's bitten on the ankle, though, by a walker that appeared to be dead on the floor. The group rallies around him, carrying him into a clearing to amputate his leg, and while they're looking for a tourniquet, they see something unexpected through a caged wall: other survivors.