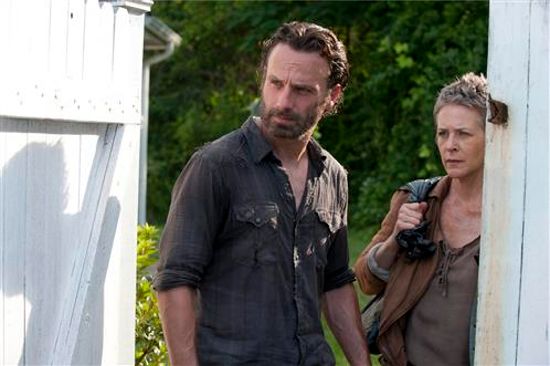 At the end of the episode, Rick told Carol that he didn’t want her in the group anymore, because she killed Karen and David. Rick gave Carol some supplies, and then sent her on her way to find a new group.

In explaining what Carol was thinking, McBride said, “We have people that are very ill. We have walkers at the fence. And he wants to go on a run. I think in her mind it’s almost like these two are testing each other. And the tables have turned for these two. You have Carol, who’s making decisions. You have Rick, who doesn’t trust the decisions that he’s making. You have a woman who use to not trust the decisions…she couldn’t make a decision. If she did make a decision, she couldn’t voice it. Carol is really making some points to Rick to say, ‘What I’ve done is not so different from what you’ve done. I killed Karen and David. You have to remember Rick. You killed Shane. We’ve all had to make horrible choices and done things that are very, very difficult to do.’ So when Rick turns to Carol and stops her and says, ‘Did you kill Karen and David?’ And she turns and says, ‘Yes.’ She waits. He says nothing. Ok, there’s your chance. You have nothing to say? Ok, well I have stuff to do. She doesn’t like this new Rick. No, we need your help. Everything in this episode is bringing him to a decision. And that decision that he makes, blows her mind. And at this point, I think Carol can take care of herself. And she will take care of herself. She’ll try.”

In explaining what Rick was thinking, Lincoln said, “The final moment in Episode 3 I had the overwhelming sense when I was doing it that I didn’t recognize this human being Carol. I was like, ‘Who are you?’ She’s in charge, man. You look in the first episode. She’s giving directions to everybody. Daryl, you need to do this, you need to do that. She’s telling my child to lie to me. Ultimately, the deciding factor is my family. It boils…it distills right back down to that again. And I go, ‘Can I have you around my children?’ That’s why I leave her by the roadside.”

Liberated Review: A Gorgeous Dystopia That Fails to Engage