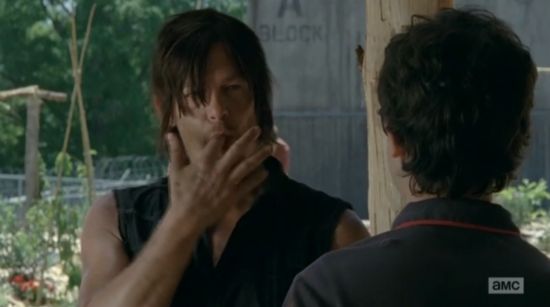 If you haven’t watched The Walking Dead Season 4 Premiere, then you’re one of the few, because over 16 million people tuned in. However, just to include the obligatory spoiler warning, we will be discussing a major event that happens at the end of the episode.

During The Walking Dead Season 4 Premiere, Daryl Dixon was eating, when Patrick came up and asked to shake his hand. Daryl licked his fingers clean, before obliging and giving Patrick a hearty handshake.

At the end of the episode, Patrick came down with some mysterious illness, which caused him to collapse and die. How did Patrick get sick? While there are numerous theories ranging from something in the water to swine flu transmitted from the pigs, the cause of the illness is still a mystery.

The Walking Dead writers are usually very clever in providing subtle hints to viewers, and anything that might seem out of place (like Daryl’s finger-licking handshake) on the show usually winds up having a reason.

Could Daryl be the Typhoid Mary of the group? He was the only person showing making physical contact with Patrick. Wouldn't it be a clever twist if the group's new leader and main food provider also turns out to be the carrier for a deadly disease? 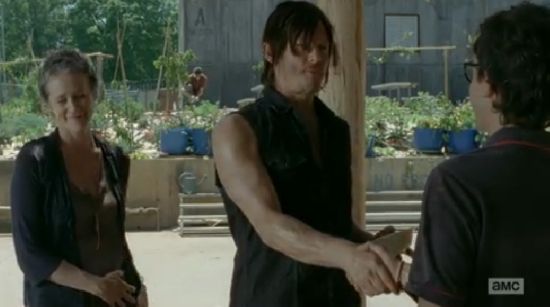 The Walking Dead: Is Daryl The Typhoid Mary Of The Group?