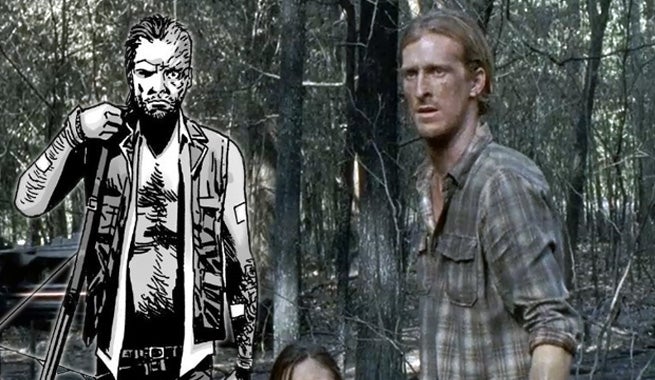 Spoilers follow for The Walking Dead season six, episode six, and its comics.

Tonight's episode of The Walking Dead introduced a new character to the series who, surprisingly, survived through all 60 minutes. Throughout the episode, his name was never revealed.

So, who is this guy who stole Daryl's bike and is being pursued by an apparently organized group which is not the Wolves?

The best assumption at this point: Dwight.

Now, who is Dwight you ask?

Dwight is one of Negan's Saviors in the comics. He is best known for his badly scarred face as a result of acting out against Negan. When men act out against the fearless leader, one of Negan's methods of punishment is to burn their face with an iron, leaving a permanent mark for the rest of the group to see. Eventually, Dwight defects against Negan and helps the Alexandrians during their war with Negan.

It seems at this point in the TV series, Dwight could be committing his act which Negan disapproves of only to be caught later and have his face burnt. Daryl's kind offer for help could also be what leads Dwight to help the Alexandrians in the war against the Saviors but also serve as an interesting plot point where Daryl won't trust him, having already been double crossed in tonight's episode. He certainly hates whoever the leader of the group hunting him is. If you listened closely, while Daryl was floating in and out of consciousness, he said, "He's probably just a soldier from one of the outposts. He probably hates him, too." That has to be a reference to Negan.

To further back up the theory, the group the man is fleeing seems to have a leader aside from the well-dressed "Wade" in the blue shirt. Not only does this potential Dwight mention "kneeling," several times, indicating a leader who demands submission, but when Wade cuts off his cohort's arm, he radios back to call off the search, saying, "He only wanted to take this so far," and "He only wants assets willing, you know?" This seems like a reference to Negan, who was referenced several times in the comics prior to his issue #100 introduction.

The woman traveling with Dwight also fits the description of his wife Debbie. It's clear potential Dwight cares for her and wants to keep her out of whatever community they came from. In the comics, Sherry submits to becoming one of Negan's wives but her and Dwight's separation anxiety leads them to rebel and is ultimately why Dwight earns his iron punishment.

The Walking Dead: Who Is Dwight?