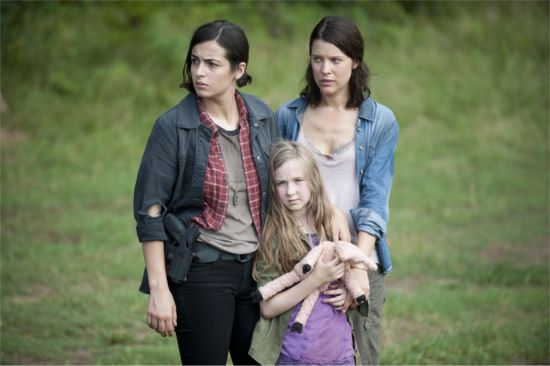 Last night's episode of The Walking Dead gave us a handful of moments that called back to previous moments in the series, helping to strike an emotional chord in the viewer with a kind of visual shorthand that gives those watching a sense for what to feel, without spending too much time on it.

It's a fairly common trick in filmmaking, but not one that The Walking Dead has typically been overly dependent on. When part of your show's appeal is that "anything can happen," it's difficult to evoke a reaction in the viewer by calling back to previous events without running the risk that you'll feel a bit stale.

So which things stuck out at us as nods to events that we've seen before? 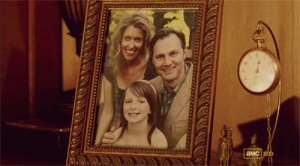 There were a number of echoes of The Governor at the survivalist cabin where he, Martinez and the brothers went to loot for supplies. As they noted on last night's Talking Dead, there were times when the whole thing kind of felt like they were trying to say, "Philip Blake, this could have been you!"

But this one in particular stood out to us because they've already used family photos as a storytelling device to set up the dichotomy between Rick and The Governor.

The pair are opposite sides of the same coin and there have been a few occasions where The Governor has faced a similar situation as Rick, so that viewers can counterpoint how they respond in that situation. A small, quiet thing that the pair have in common is that their family photos have played a role in informing their stories.

Last season, the Governor's family photos were often shown prominently in episodes, while there was actually a story beat revolving around a photograph of Rick and Lori that Carl and Michonne braved a crowd of walkers to recover from an abandoned building. It's been used a couple of times, with Rick and Carl each looking at it wistfully at least once.

Here, we get the family photo of the man who killed and decapitated a number of Army guys that he labeled as liars, rapists and murderers. It's unclear exactly what went down to create the scene, but inside the man's house, we find a pair of walkers likely to be he and his wife, so it's possible that the rape and murder he's accused his victims of was that of his daughter.

The Governor, of course, recently burned the photo of his family and then adopted a new family in the form of the girls he's traveling the countryside with. That we see him lingering on this other man's family photo just an episode after he finally and dramatically divested himself of his own seems meaningful.

Meghan Hides Under the Camper

This one might just be us, since there have been several instances of people hiding under vehicles in the series (including Rick Grimes under the tank in the pilot)...but Meghan hiding under the camper from the oncoming walker felt weirdly similar to Sophia taking cover under traffic when that swarm first hit Rick's group before they found their way to Hershel's farm.

That didn't end particularly well for her. Could they be sending us a bit of a message...?

As noted on last night's episode of Talking Dead, it seems likely that the survivalist keeping the heads of his victims in his cabin is reminiscent of The Governor's aquariums full of walker heads, which he kept last season and which included both zombies and humans he'd killed.

He meditated on these to push himself to become what he thought he needed to do in order to survive in the world--which of course has become his guiding philosophy and is what makes him both dangerous, and an effective leader.

Speaking of both Talking Dead and the room full of heads, they noted last night that The Governor going to check on Pete--his most recent murder victim, chained to stones and trapped underwater--could be seen as similarly reflecting on his actions and the world. Again, the presence of the water along with his victim almost makes the lake a bit like the latest incarnation of his creepy mancave.

Which makes sense when you consider that the camp is the new Woodbury, at least for the moment...

Next week: THE COMICS

Yeah, if you've seen the trailers for the midseason finale you'll have noticed that The Governor has a tank. And that, yes, it seems to reflect a scene that happens in the comics pretty clearly. We're wondering whether, since Lori is already dead, there might be someone else who's set to reflect that scene from the comics.

Last night, we speculated that it was likely to be Beth and Judith...but given all the echoes of other stories that have happened during The Governor's storyline, what if it was instead Meghan and Lilly? This would reverse the positions of Rick and The Governor, and seeing how The Governor would react to being responsible for the death of his "family"--again--would be interesting to see. It might send him into a spiral that ended with either extreme violence or perhaps just feeding himself to the walkers, as Hershel did following the death of his son in the comics.

You know--during the same battle...

The Walking Dead: Latest Storyline Reflects Past Events, Hints at Next Episode?