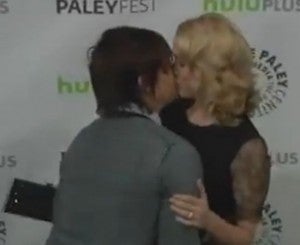 When video surfaced of Norman Reedus kissing Laurie Holden at 2013 Paleyfest, it sparked online rumors that the two might be dating. We reported on the rumors, and Norman Reedus himself quickly set the record straight, pointing out that he has kissed all of his fellow cast members.

Well, Ryan Seacrest decided to put the question to Laurie Holden as well during a radio interview. Ryan Seacrest said, “Now, Laurie, you know you’ve made it when the blogs are writing about you dating a co-star.” Laurie Holden responded, “Yeah, I mean, you know, I think that Norman kinds of fuels that fire, because he like loves to come up and kiss me on red carpets.”

Laurie Holden continued, “And then of course, I get the backlash of that, because all of his teenage fans, who love him, come after me, and they’re like ‘Back off, that’s my man.’”

Ryan Seacrest interrupted, “He’s the one making you the victim here.” But Laurie Holden disagreed, “No, I think, we love each other. We’re like the best of friends, but I think he likes to stir the pot a bit.”

The Walking Dead Spinoff Reveals Which Character Could Save the World

The Walking Dead: World Beyond Season 1 Finale Recap With Spoilers