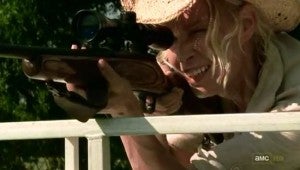 In this weeks issue of Entertainment Weekly, there’s a nice long article about Norman Reedus, who plays Daryl Dixon on The Walking Dead. In the article, Norman Reedus talks about what happened after Andrea shot Daryl on the show.

Even though Andrea only clipped Daryl in the side of the head with a bullet, Laurie Holden, the actress who plays Andrea, started getting death threats from Walking Dead viewers. Norman Reedus said, “She came to the set and was freaking out: ‘People want to kill me!’ I was like, ‘Come on.’ And the next day: ‘Norman, I’m terrified. People are threatening my life!’”

In order to diffuse the situation, executive producer Gale Anne Hurd asked Norman Reedus to take a picture with Laurie Holden and say “Hey, we’re buddies. Don’t be mean to her, she’s just playing a part.”

So that’s exactly what Norman Reedus did. He took photos with Laurie Holden and sent them out to let Walking Dead fans know that Laurie is just playing the part of Andrea.