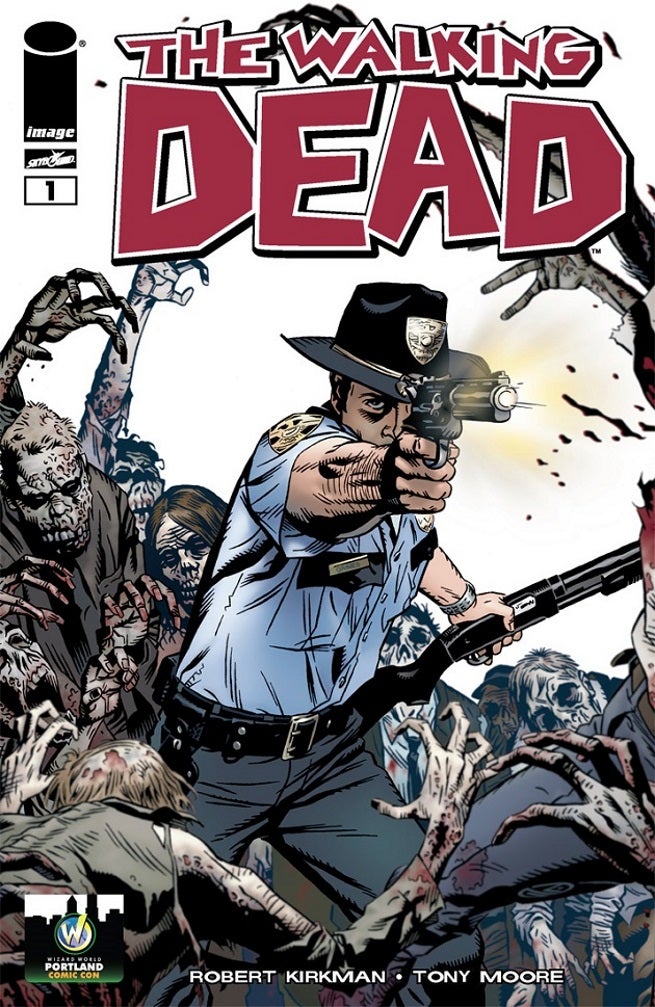 Wizard World is launching a series of Limited Edition Exclusive Variant Covers of popular issues of The Walking Dead, that will be given away free to all full-price attendees at every Wizard World Comic Con in 2015.

The covers will be drawn by artists regularly appearing at Wizard World conventions. The first cover will debut at Wizard World New Orleans Comic Con, January 9-11 at the Ernest N. Morial Convention Center. Artists will be announced as they are chosen.

The new series of variants follows the popular series of The Walking Dead #1 variant covers released at last year’s conventions (The Wizard World Portland Comic Con variant is seen above).

The limited run of The Walking Dead variant cover issues will be available to fans at registration only while supplies last. VIP attendees will receive an additional black & white sketch version of the comic. The full schedule of 2015 Wizard World shows is available at www.wizd.me/PRSchedule2015.

“Skybound is pleased to work with Wizard World and many talented artists to bring this series to thousands of fans,” said Kirkman, “Wizard World attendees have been great supporters of The Walking Dead for years, so these books are particularly appropriate for this audience.”

“Wizard World fans have shown a strong desire for everything The Walking Dead, and we are proud that this partnership with Robert Kirkman and Skybound will allow us to give these books free to all of our paid attendees,” said John Macaluso, Wizard World CEO and President. “We have seen the rise in popularity of The Walking Dead, from popular celebrity guests like Norman Reedus, Jon Bernthal, Michael Rooker and many others, to cosplay of dozens of characters, to artwork and merchandise at our shows. We know that fans will appreciate the return of one of our most popular promotions ever.”