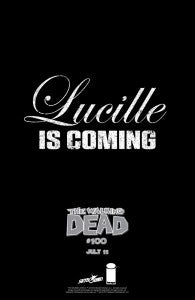 Image Comics and Skybound have just released a teaser for The Walking Dead #100 that simply reads, "Lucille is coming." The fancy script of the name suggests someone prissy, but in the world of The Walking Dead that wouldn't fit so it seems likely she'll be someone who isn't what she first seems.

Either way, she's probably tied to the characters with the blacked-out faces who have been appearing on the cover of The Walking Dead during the current "Something To Fear" arc.

The issue will hit the stands on July 11, the same day that San Diego Comic-Con International kicks off, so expect to see an explosion of coverage right around then.

The Walking Dead: Lucille is Coming