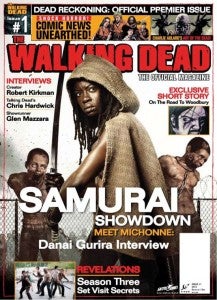 The Walking Dead was already a hit comic book and a hit TV show, but now it is also becoming a hit magazine. Titan Magazines and Skybound have announced that The Walking Dead, The Official Magazine is already one of Diamond’s best selling magazines of all time.

The even more amazing thing is that these sales levels were reached more than a month prior to its release. In order to handle the demand, Diamond is actually extending the ordering deadline for the first issue.

The Walking Dead Magazine #1 is scheduled to hit shelves on October 23, which is shortly after The Walking Dead Season 3 premieres on AMC on October 14. The first issue of the magazine will feature 100 pages of news, revelations and tips for fans of the television show, the comic book series, the graphic novels and the entire The Walking Dead universe. 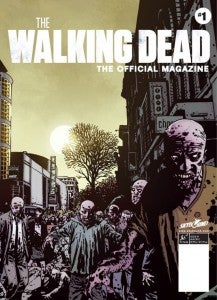 Tom Mitchell, Purchasing Brand Manager at Diamond Comic Distributors said, “Orders of The Walking Dead, The Official Magazine have been through the roof and it is now one of our best selling magazines ever. Retailers can still place orders of issue #1 from Diamond. Don’t miss out on this hotly anticipated launch."

“Titan is putting a huge amount of effort into making this magazine as cool as it can possibly be, so I have to give a huge hats off to them for that,” said The Walking Dead creator/writer, Robert Kirkman. “I’ve been fortunate enough to partner with fantastic people who really make the greatest products in their field and I’m happy to count Titan among them.”