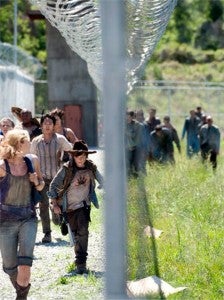 Are you a fan of The Walking Dead? Or are you someone who has heard about the show and are anxious to find out what all the hoopla is about? If you fall into one of those two categories, then you are in luck this weekend.

The “Days Gone By” episode is then followed by the “Guts” episode and the “Tell It to the Frogs” episode. After the first three episodes from season 1, there is a special treat for fans at 1:40 PM ET, as AMC will air a sneak peek at The Walking Dead season 3. After the sneak peek, the marathon continues with the remaining episodes of The Walking Dead season 1, which includes “Vatos,” “Wildfire,” and “TS-19.” At 4:53 PM ET, the marathon turns to the second season of The Walking Dead with the season 2 premiere called “What Lies Ahead.”

After “What Lies Ahead,” the marathon continues with the remaining season 2 episodes: “Bloodletting,” “Save the Last One,” “Cherokee Rose,” “Chupacabra,” “Secrets,” “Pretty Much Dead Already,” “Nebraska,” “Triggerfinger,” “18 Miles Out,” “Judge, Jury, Executioner,” “Better Angels,” and “Beside The Dying Fire.”