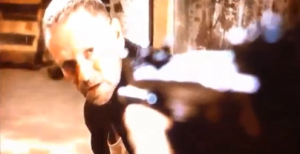 In a new, Australian TV spot for the upcoming midseason finale of AMC's The Walking Dead, titled "Made to Suffer," somebody's holding a gun on Merle.

Yeah, we said something that could be kinda spoilery in the lead. You clicked on a story that says "spoilers" in the headline.

The preview, embedded below and passed along to us from a reader who found it on YouTube, is a thirty-second TV spot running on FX Australia and doesn't have a whole lot of information to share, but one thing did stick out: Who's that holding a gun on Merle Dixon at about the 19-second mark? 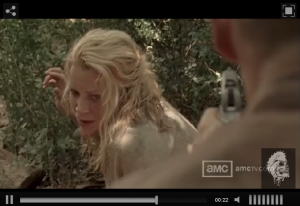 Here's the thing: it appears to be either his brother Daryl, or one of the Woodbury survivors. The hands on the gun are white, so it's not Oscar or Michonne--that only leaves Rick Grimes (seen in the ads alternately carrying a machine gun with a large scope on top or his trademark revolver) and Daryl of the rescue party who might be holding the gun.

Of course, there are plenty of white guys in Woodbury -- and the odds are pretty good that when the Governor finds out Merle lied to him about the death of Michonne, he won't have many friends in town. If he makes it through the episode, it's likely to be at his brother's side, because unless Michonne can get into and out of town without the Governor noticing, it seems likely Merle's days will be numbered in Woodbury.

It's probably worth noting that, if you go through the moment frame-by-frame, Merle's eyes widen as he looks at the gunman. Whether that's surprise at seeing Daryl or surprise at seeing one of his own people holding the gun is anybody's guess.

Besides all of that, there's another possibility: it could be Andrea. If she realized what was going on and decided to abandon Woodbury, Merle could end up in her way, or she might even just be inviting him along. In any case, Andrea seems like a good candidate for no reason better than the fact that the angle of the shot looks similar to the image at right, culled from one of the pre-season ads, which turned out to be Merle holding a gun on Andrea. That would be a fitting image to mirror if her time in Woodbury was coming to an end.

The Walking Dead Midseason Finale Spoilers: Who's Holding That Gun?