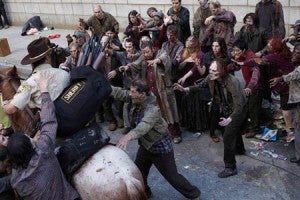 While last season, cloistered on the Greene Farm and relatively safe from the walkers most of the time, the survivors on AMC's The Walking Dead didn't spend a whole lot of time finding and killing zombies, one of the show's effects guys say in a new featurette on the AMC website that won't be the case this time around.

That makes enough sense--first of all, the season will start out with the survivors wandering in the woods and, once they finally reach the prison that was their relatively safe home for a long time in the comics, one suspects they'll remember the last time they were comfortable and confident, and the dramatic and horrifying way it ended at Herschel's farm. That will presumably motivate some proactive zombie slaying in addition to the "as circumstances warrant" variety that's been the philosophy to date. The fact that Michonne, who has figured out how to live on her own in the strange and terrifying world of The Walking Dead, joins the cast this season probably also suggests some creative and entertaining violence in and of itself.

"Unfortunately a lot of that I can't tell you just yet, but we did a lot of killing last season, and this season we're doing a lot more," says  Victor Scalise in the featurette, which you can see below. Scalise, the visual director for the show's effects department, says he thinks fans are going to love the season three premiere, and reveals which walkers are actually actors in makeup and which of them are special effects created by the computer. Hint: sometimes the two types even appear in the same scene!

Check it out. The Walking Dead's third season begins on AMC in October, but there will be plenty of news between now and then, including coverage of the show's Comic-Con announcements, panel and an interview with creator Robert Kirkman.