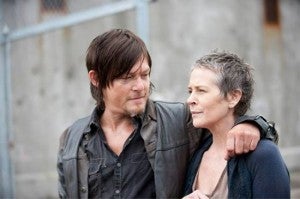 A new, 30-second promo for season four of AMC's The Walking Dead has been released online.

The ad, which focuses mostly on the threat the walkers present to the prison this season, features a bit of Carol at the beginning, telling some of the Woodbury children who live there with Rick and his group that they need to learn to be strong in order to survive.

Carol, of course, is an interesting source for that kind of information; she was an abused spouse early on and then a shell of a person after the death of her daughter.

Check out the ad below.