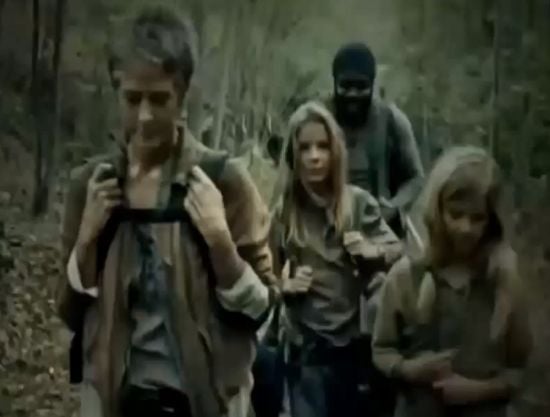 The image above, apparently showing Carol and Tyreese's group of survivors sans Baby Judith, was just the first in a series of teasers, comments and other promotion for the episode that all had one, consistent message: things are going to get messy.

How messy? Well, there was a lot of blood, and not all of it on one person's hands. And, reminiscent of something that Kirkman talked with me about back in 2009 (when the events of this episode were happening, with some minor tweaks, in the comic book source material), it's worth noting that it's been quite a while since we saw any of the principal cast die at the hands of a walker.

People are, again, the bigger threat... 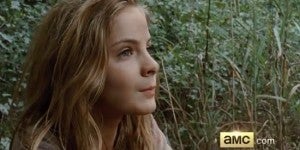 The episode opens with the dream-like sequence teased on Talking Dead last week, Carol boiling tea in a kettle in what looks like a well-kept old house. Outside, Lizzie plays tag with a walker while eerie music plays and the teakettle screams.

Next shot, it's dark and Carol is with Judith and Lizzie; it's their turn to watch while Tyreese and Mika are sleeping. Lizzie asks whether there will be kids at Terminus, and Carol says that they will make it if their parents kept them safe; Lizzie tells Carol about saving Tyreese from the Governor's soldiers, saying that she didn't mean to shoot Alisha in the head. Lizzie asks Carol whether she had kids in the past, and Carol tells her about Sophia -- that she didn't have a mean bone in her body...and that's why she's not here now.

In the background, after Lizzie heads off to bed, Tyreese wakes from a restless sleep.

The next morning, Carol is dressing a wound on Tyreese's arm, discussing how long they have to Terminus. Tyreese guesses three or four days' travel time, but Carol isn't sure; they haven't seen maps on the tracks in a while. She tells Tyreese that Lizzie is confused about the walkers, thinks they're just "different." Mika, she says, is worse: She doesn't have a mean bone in her body. 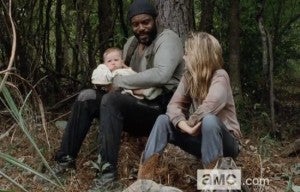 Walking along the tracks later, talking about The Adventures of Tom Sawyer, the group smells a fire in the distance (it must be a big one, Carol thinks), but guess that it's likely a distance away. Tyreese waits with Lizzie and Judith while Carol and Mika go searching for supplies; while they're playing "I spy," Tyreese sees someone ambling down the railroad tracks and, taking out his hammer, heads down the tracks to investigate. Before he gets there, the form falls. It's a walker, and it trips over the tracks. One of its legs rotted out from under it or snapped when it tripped. Tyreese prepares to kill the walker, but Lizzie protests, saying that she understands they have to kill them sometimes, but sometimes they don't have to; this one is, presumably, not a threat to them since it's got no ability to walk and cannot give chase, and since they've already passed the point on the tracks where it lies so they won't be walking blindly past it like Hershel in the prison.

The pair stumble upon a house in a grove. It's surrounded by nuts, fruit, and a small fence, and Mika, delighted, says that her mother always said that everything happens the way it's supposed to.

The group decides to take shelter there. They see a giant smoke cloud in the distance and intuit that must be what they were smelling -- and that it's sending animals their way. While Tyreese and Carol clear the house, the girls stay outside to keep watch with Judith. They see what appears to be the home-dug grave of a baby. When a walker tumbles out of the house and goes after them, Mika shoots it. The adults come running out to praise her for her quick thinking, but Lizzie has a minor meltdown because they killed a walker.

Inside, Mika and Tyreese enjoy the creature comforts of the Grove. Mika suggests maybe they should just stay there in the house, rather than moving on to Terminus.

The next morning, it's back to the scene of Carol brewing tea while Mika plays tag with a walker...this time, though, the eerie music is gone and it's robbed of its surreal, idyllic quality. Carol runs outside and kills the walker just as it's clutching at Lizzie, only to have Lizzie freak out because Carol "didn't have to." Inside, Tyreese watches the episode unfold. "You killed her! She was my friend!" And "What if I killed you?" are some of the choice moments from the fit.

While Carol and Mika are out scouting, they see that the fire in the distance is still burning. They see a deer and try to shoot it, but Mika can't bring herself to pull the trigger, just like she couldn't shoot The Governor's soldiers at the prison.

When she returns to the Grove, Carol finds Tyreese pumping water; he suggests that they should stay in the Grove for good.

When she sees Lizzie wandering away from the house, Mika follows her back to the railroad tracks, where she finds her feeding a mouse to the walker that she convinced Tyreese to spare. Lizzie tells Mika that maybe she should let the walker bite her so she can be like them and make the other survivors understand. While she considers it, though, a group of walkers, blackened from the fire, stagger after them and the girls run screaming.

They hurry back to the house and through the fence, but Mika gets stuck. She's almost bitten, but the group saves her and takes out the small herd of walkers (even Lizzie helps, for which Carol praises her). That night, Lizzie tells her that she had to help stop them and that she knows what she has to do now. Mika says she doesn't want to hurt anyone, and Lizzie tells her that you have to sometimes.

Tyreese and Carol walk together, Carol warming to the idea of staying at the Grove. He admits that he's been having dreams about Karen. He's not ready to be around other people yet. He feels the world is haunted. Carol seems to nearly tell him that she is Karen's killer, but ultimately tells him only that the dead are all with them now and make them who they are. Tyreese hugs her, telling her never to be ashamed of who she is, and that she did right by the kids.

When the pair return from their walk, they discover Lizzie, standing there with a bloodied knife and hands. Mika is dead on the ground behind her, but "Don't worry, she'll come back," Lizzie said. "I didn't hurt her brain." Judith is alive, crawling on a blanket. Lizzie tells them that she was just making Mika into a walker, so they can understand.

Tyreese and Carol try to take the knife from Lizzie, but she pulls out a gun and makes them promise to wait and let Mika turn. Carol tells that they can do that, but that Lizzie and Tyreese should bring Judith inside, since it isn't safe for her. Lizzie starts to tell them that she was just about to kill her, too, but Carol cuts her off and tells her that the baby can't even walk yet and has to go inside. She tells her that she'll tie Mika up so that she doesn't go anywhere, and that Lizzie and Tyreese can go inside and have lunch. After they leave, Carol breaks down, then takes out her knife.

That night, Tyreese and Carol discuss what needs to be done; he tells Carol that he cleared out her room to make sure that she didn't have weapons. She has a shoebox full of mice, and Tyreese tells Carol that she admitted to being the one who was feeding the walkers at the prison, and who nailed the rat to the board in the Tombs. He tells Carol that he thinks she killed Karen and David, but Carol says she would have let them turn, so it wasn't her.

The next morning, Carol brings Lizzie out for a walk and tells her that they should pick flowers for Mika to give her when she reanimates. Carol's very sad when Lizzie starts making similar small talk to what Mika did the previous day about the fire. Lizzie becomes upset, thinking that Carol is mad at her for pulling a gun on them. Carol assures her that she loves her and that everything works out the way it's supposed to.

Carol tells her to look at the flowers. As Lizzie does so, Carol shoots her while Tyreese watches.

Carol breaks down again, seeing a deer in the clearing. The sisters are buried beside the grave of the baby seen earlier.

That night, Carol and Tyreese are sullenly staring at a jigsaw puzzle when Carol slides the gun across the table to him and admits that she killed Karen and David. She tells him why -- that she did it to stop other people from dying. Tyreese grips the gun and Carol tells him to do what he has to do. He asks Carol if it was quick and she says it was, that Karen wasn't scared and didn't know what was happening. He then tells her that he forgives her. He won't forget -- the dead are part of who they are now -- but that he understands why she did it and he forgives her.

The pair decide that staying in the grove is no longer a possibility -- that with the mystery solved, Tyreese can (and must) now be around other people. The next day, they leave, passing the graves, passing the walker still trapped on the tracks, and continue on the path to Terminus.

Over the show's closing moments, audio from the first episode of the season -- Carol instructing the girls on survival -- plays over their silent walk back up the tracks.

The Walking Dead Recap With Spoilers: The Grove

Is The Elder Scrolls 6 Going to Be Xbox Series X Console Exclusive?

Erik Larsen Talks Savage Dragon's Tribute to the Funnies in #252