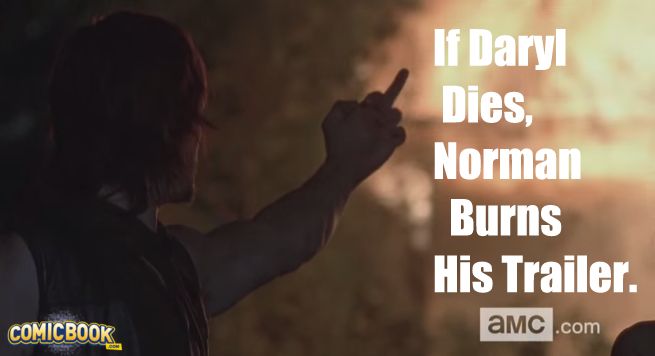 Norman Reedus fans have a saying about what they will do if The Walking Dead writers ever kill off their favorite character Daryl Dixon. The popular saying goes, “If Daryl dies, we riot.”

During the Inside The Walking Dead documentary on Tuesday night, Norman Reedus shared exactly what he would personally do if Daryl Dixon died. Here’s what Reedus had to say.

If they kill me on the show, I’ll probably like set my trailer on fire. They’ll probably have to call in a bunch of cops to escort me off the property, because I’ll be so pissed.

So maybe the new saying that should be printed on t-shirts is, “If Daryl dies, Norman burns his trailer.”

The Walking Dead Season 5 premieres in October 2014 on AMC.

Legendary's Godzilla: Where Can The Kaiju Go In The Future?