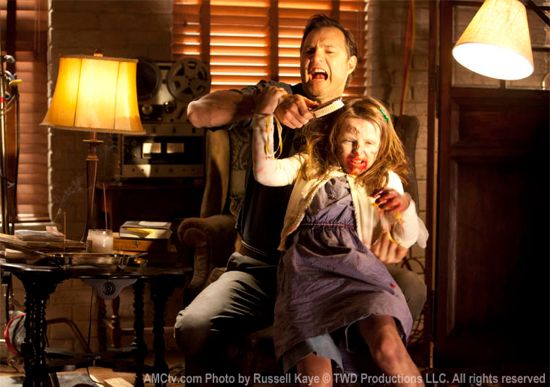 Nicotero said, “There was a scene where Maggie and Daryl, they are on the motorcycle and they are driving along, and there’s a log that’s blocked the road, and they stop for a second. And Maggie gets upset, and Darryl says, ‘Were you bit? Or was she bit?’ Like asking about Lori. Well, what happened they never really get into it. I thought it was an important scene because she says, ‘No, but I had to cut here open.’ And she’s really emotional, and then she looks at Daryl and says, ‘Oh, my god, I’m so sorry about Carol.’ And Norman’s reaction was so real and so raw and he says, ‘She had so much hope for the baby.’ And it sort of spurs their journey, pushes their journey forward to find the formula for the baby.”

Nicotero revealed a second deleted scene involved the scene at the pits. Nicotero said, “In the original director’s cut, you see a walker walking through the grass and then he drops out of frame, and then when the truck pulls around, and Merle gets out, you’re over Merle’s shoulder looking down in the pits. You see all the walkers. So it tells that story, and then it was just one of those situations, where you know maybe we don’t really need to tell that story visually that early, and let it develop into where we see the net coming up. Like the deadliest catch thing that I talk about, and then the nets come up and you reveal walkers, and you go, ‘Ok, I get it.’”

A third deleted scene involved Beth and Carl. Nicotero revealed, “Carl was talking about the fact that he had to kill his mom, and where is she? Is she with Shane now? Is she dead? Is she in heaven? Is she in hell? Where is she? “ The scene was ultimately cut because there was just so much jam-packed into that episode something had to go.

As far as how it’s usually decided what scenes get cut out, Nicotero explained, “The process is interesting, because the directors turn in their cut, and then the producers make changes and finesses on it, then it goes it to AMC. So every step of the way, everybody has notes.” Nicotero also revealed that he thinks they will put all the extras in when they released The Walking Dead Season 3 DVDs for those episodes.