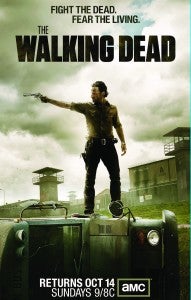 With just over a month until AMC's The Walking Dead shambles back into your living room, the network has released a one-sheet poster for the upcoming third season that focuses on series star Andrew Lincoln, apparently poised to defend the prison.

"In an uncertain world, Rick Grimes (Andrew Lincoln) and his band of survivors must not only fight the dead, but also face a whole new fear: the living," said AMC in a release that came along with the art.

The series, a ratings juggernaut for the cable network, will return to TV on October 14 with eight new episodes, then go on hiatus until February and return with eight more. At present, that's all that's been ordered by AMC, although the safe money is on another order of more episodes coming up soon, especially considering that they're just a few episodes away from losing Breaking Bad, one of their other fan- and critic-favorite series.