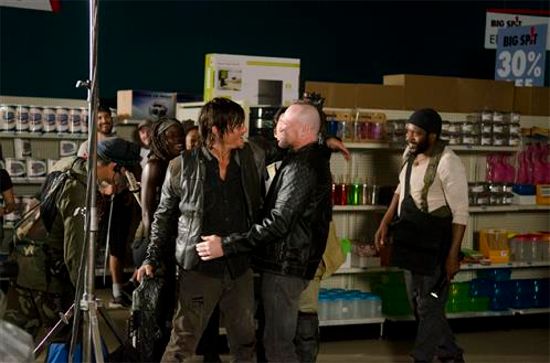 When Comicbook.com asked Michael Rooker earlier this year if there was any chance of his character Merle Dixon returning in a flashback or hallucination scene in Season 4 of The Walking Dead, Rooker told us, “It will cost them [laughing].”

In a more recent interview with Digital Spy, Michael Rooker downplayed the possibility of Merle returning. “You know what, I died two times in one episode! So as far as I know, I am dead... and there's nothing I can do about it,” said Rooker. "I don't think they're going to go back and relive that. I think they're busy doing their own thing going forward."

However, Michael Rooker has now been officially spotted on the set of The Walking Dead during Season 4. No, this information didn’t come by way of the anonymous source of a cousin who had a friend who knew someone who’s uncle told them that Merle was spotted on set. It comes from an AMC behind-the-scenes  photograph by Gene Page, which shows Michael Rooker giving Norman Reedus a big hug on set during Season 4.

The scene that is being filmed is the Big Spot scene that took place during the Season 4 Premiere, and of course, Merle did not appear during that scene. But the question remains, why was Michael Rooker on set? Was he filming a scene that will air later in the season? Or did he just happen to be in the area and decide to pay a visit to some old friends?

Back in mid-September of this year, Michael Rooker also did a Twitter takeover for Valhalla Entertainment, which is the production company of The Walking Dead. Could it have been part of a deal to have Rooker make an appearance during Season 4 of The Walking Dead? 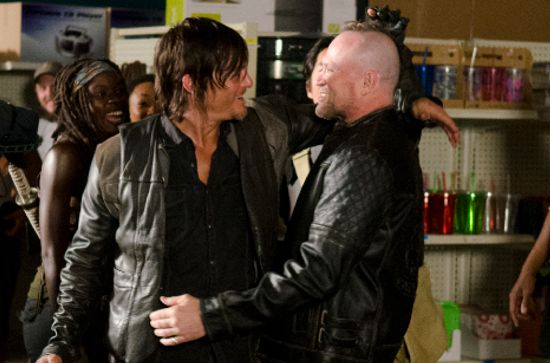