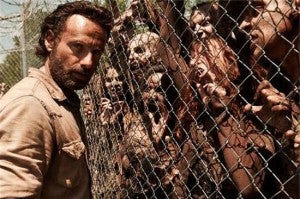 In addition to releasing a bunch of new photos today, AMC has also released episode titles and descriptions for the first four episodes. While there are no major, shocking reveals in the titles or descriptions, we are including a spoiler warning for those who consider such information to be a spoiler.

Here are the official titles and descriptions for the first four episodes of Season 4 of The Walking Dead.

EPISODE 401: 30 Days Without An Accident - Rick and the group are as close to an ideal life as possible at the prison. Will they be able to hold on to humanity in the face of a new evil?

EPISODE 402: Infected - As the group faces a brand new enemy, Rick and the others must fight to protect the livelihood they worked so hard to create at the prison.

EPISODE 403: Isolation - A group leaves the prison to search for supplies; the remaining members of the group deal with recent losses.

EPISODE 404: Indifference - The supply mission faces hurdles; the situation at the prison worsens.