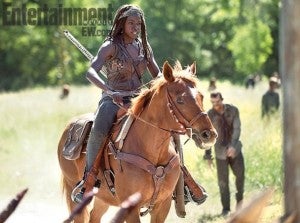 have released a new photo from the production of AMC's The Walking Dead which shows Michonne on horseback.

While some of the iconic imagery from the pilot saw Rick on horseback, that's a mode of transportation that's been largely done away with in the series--but of course the "more civilized" way that the survivors will be living at the start of the season, coupled with the increased number and ferocity of walkers (and therefore the danger associated with comparably loud cars that could run out of gas), likely make it a more plausible, attractive solution.

"I’m going to tell you this and I’m going to regret saying this, but I’m proud of myself, O.K? Because I learned how to ride a damn horse and I didn’t know how to ride a horse, and I was like, ‘I’ve got to know how to ride a horse for the show, and there’s no ifs, ands, buts, or maybes about it," said Danai Gurira, who plays Michonne on the hit drama based on the Skybound comics by Robert Kirkman and Charlie Adlard. "So, I’ve got to figure this mess out.’ And when I got on that thing, I thought I was going to be able to handle it. I said, ‘I’m going to be able to handle this thing!’ I thought it would be fine, and then I got on it and I was like, this is really not easy. This is not easy. This is a huge beast and it has very sharp instincts. It really expects you to know what you’re doing or it’s not going to listen to you. And, it’s bigger than you and stronger than you. And, you’re really high off the ground."