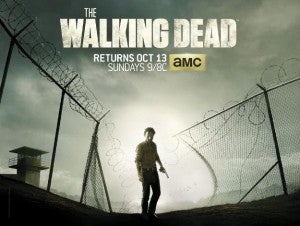 "Everything we've been working so hard to keep out, just found its way in," says Hershel Greene in a new teaser for AMC's The Walking Dead, the fourth season of which debuts in just over a month.

It's accompanied by a number of shots of walkers outside of the prison and then what looks like quarantined or closed-off cells inside, which--since "we're all infected"--could be a way in even without the trashed outer gates we saw in a teaser poster last week.

You can check out the new teaser below via AMC's official YouTube account. "Something mysterious threatens the safety at the prison," says the caption. "Don't miss the Season 4 premiere of The Walking Dead, Sun. Oct. 13 at 9/8c."

The Walking Dead Season Four Promo: "Everything We've Worked So Hard To Keep Out..."