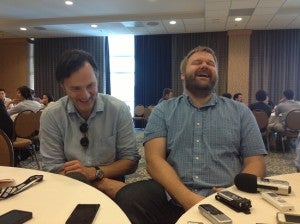 When David Morrissey, the Governor on AMC's The Walking Dead, survived last season and was added to the upcoming fourth season of the series as a regular, it was easy to wonder just how he fit into the show.

He could be making the tea, after all.

At a press event yesterday, though, Kirkman said that the time split between Woodbury and the prison last season was an interesting format change and that, without spoiling the Governor's arc in the new season, there would be a similar division of screentime--but done differently--in season four.

For his part, Morrissey was pretty tight-lipped, saying only that the Governor's actions from last season will reverberate through the new season.

Killing isn't done lightly on this series, he explained, and what the Governor did in the finale won't be without consequences, morally and psychologically as well as the obvious consequences of being a leader without anyone to lead.

The Walking Dead Season Four Will Have A New Storytelling Format