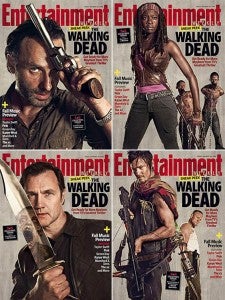 In discussing the upcoming third season of AMC's The Walking Dead with Entertainment Weekly in a new issue that hits stands today, creator and executive producer Robert Liefeld said that it's as much as anything about the dichotomy between the world of Woodbury--a wide-open space that's under the thumb of a malevolent dictator--and the prison, a safe, confined area controlled by a more benevolent one.

“This season really is about setting up these two worlds and watching them come to a head and collide,” Kirkman told EW. “And you know that there are going to be some pretty explosive encounters between Rick and the Governor. This season is going to be about getting to know these two characters, and then waiting for their eventual confrontation that could destroy everything.”

Fans of the comic know that, barring some major changes to the long-term story structure of The Walking Dead, the confrontation in question is a game-changer. While there's no official fourth-season pickup yet for the series, which would give the writers an enormous amount of leeway, except that nobody seriously believes it won't be.

The series was the lucky subject of four variant covers for Entertainment Weekly this week--one featuring series lead Andrew Lincoln, who plays Rick Grimes; one featuring Michonne (Danai Gurira); one featuring The Governor (David Morrissey) and one with Los Bros Dixon (Michael Rooker as Merle and fan-favorite Norman Reedus as Daryl). Merle, of course, has been gone since the first season and is likely to be a wild-card in the storyline, especially since there's no corollary to him in the comics, so there's no telling what might happen with his character or how he might affect the timeline at any given time.

The Walking Dead shambles back to your screen on October 14.