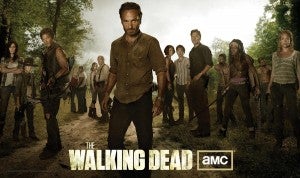 A new promotional poster for The Walking Dead's upcoming third season on AMC debuted today, with the survivors--headed up by Rick Grimes--gathered together and joined by the two newcomers, Michonne and The Governor.

[Updated 9:51 PM EST - Removed comments about missing cast members, as the version passed along to us was a trimmed version of the poster which did not include the full image. We've added the final version at left.]

The Walking Dead's third season will premiere on AMC October 14.

The Walking Dead: Season Three Poster Puts the Cast With The Governor