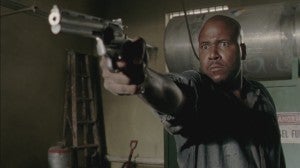 There are spoilers ahead for tonight's episode of AMC's The Walking Dead.

When T-Dog spent most of the life of AMC's The Walking Dead not saying a word, a number of fans joked that they could tell he was going to die when he finally had a few lines of dialogue in an episode.

When Oscar joined Rick's band of survivors literally within minute of T-Dog being written off the series, I couldn't resist; I joked on Twitter that "apparently the 'T' stood for 'token,'" and it was the kind of joke that was only halfway a joke. The showrunners had taken great pains, during interviews and on Twitter, to convince fans that T-Dog was more than just "the group's black guy," and that he would ultimately have a real role to play--something that ultimately proved not to be the case.

That's perhaps underscored by tonight's decision that the introduction of Tyreese meant that Oscar's services were no longer required. They'd beefed up Oscar's character quickly, giving him the quiet dignity of refusing to beg Rick for his life and then to take the easy way out by killing Rick when he had the chance. It seemed as though they were investing in the character's future, but in fact they were merely making sure the audience connected with him a little so that he could be the "big" sacrifice of the week's episode.

Here's the thing: the jokes that the group "just needed a black guy" after T-Dog died seemed like a bad joke, but it seems as though they may have had some validity. Were we simply waiting on Tyreese, and somebody decided that after T-Dog's death they didn't want to go three weeks without a man of color on the cast? The showrunners have acknowledged that T-Dog's death was done when it was (possibly pushed up?) in order to build suspense and throw viewers off the scent of Lori's death later in the episode. Was Oscar literally introduced just to be the token black character in the time between T-Dog's death and the introduction of Tyreese? Isn't that even worse than just going ahead and losing the cast diversity for three weeks?

Obviously, these are uncomfortable questions -- but even those who mocked other fans when they were suspicious that T-Dog was little more than a prop have to see a pattern forming at this point, right?

One possibility I can see that might offset the stunt somewhat (but doesn't excuse it entirely) is that the writers, who tried to keep Tyreese's presence secret up until very recently, may have introduced a new, African-American character to step in when T-Dog was killed specifically to throw viewers off the scent of Tyreese joining the survivors so soon.

As an aside, anybody remember how in the early days of the show, there was a conspiracy theory among some fans that Merle was the Governor and T-Dog was Tyreese? Glad to see that go.