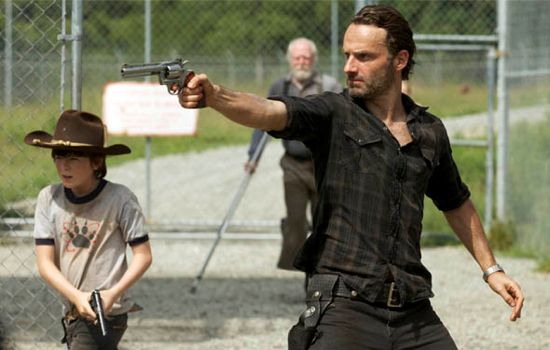 Last week, the “Hounded” episode of The Walking Dead showed us Andrea’s relationship with The Governor taking a romantic turn. Also, Glenn and Maggie had an unpleasant reunion with an old friend. At the end of the episode, Michonne shows up at the prison and stares through the fence at Rick. Will Rick let Michonne inside? What does Merle have planned for Glenn and Maggie?

This week’s episode of The Walking Dead is entitled “When The Dead Come Knocking.” According to the AMC description, “The Governor presses for information. A new guest arrives at the prison, forcing Rick's hand.”

In the official sneak preview for “When The Dead Come Knocking,” things pick up right where the last episode ended. Michonne is standing outside the fence of the prison among several walkers, while Rick Grimes looks at her. Because she’s covered in zombie blood, the walkers aren’t attacking her at first. But then, one of the walkers realizes she’s not one of the dead. As Michonne slices and dices walkers with her katana, Carl runs over and asks if they should help her, but Rick just walks away from the fence.

The Walking Dead Sneak Preview: When The Dead Come Knocking