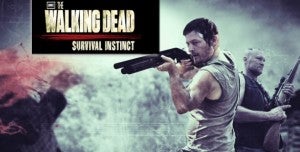 Glenn Gamble, one of the creators behind The Walking Dead: Survival Instinct (the upcoming first-person survival game based on the AMC television adaptation of Robert Kirkman's hit zombie series), appeared on the Up at Noon webcast today to give fans a first look at the game.

Among other things, Gamble revealed that there was no great mystery to Merle and Daryl Dixon being the focus of the game. The fans wanted to see Daryl as the main character, he explained, and so did the developers.

It makes sense, though, becuase as they point out, there are a few games based on The Walking Dead floating around out there, and using characters exclusive to the TV series (Merle and Daryl don't appear in the comics) can help to differentiate theirs in the marketplace. In the game, players act as Daryl.

The game, coming this year from Activision, has drawn some pretty serious ire from commenters on the YouTube page, who criticize the quality of the graphics and animation.