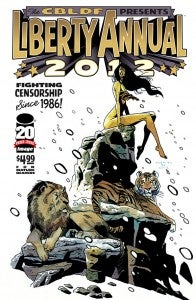 We've known for a while that there would be a special chapter of The Walking Dead appearing in the CBLDF Liberty Annual this year, alongside stories by comics industry luminaries like Jonathan Hickman, Andy Diggle, Ben Templesmith, Howard Chaykin, James Robinson, Chris Roberson, Roger Langridge, Terry Moore and Kieron Gillen.

Now, though, thanks to Bleeding Cool and one of their retailer friends, we know a bit more about the actual story, what it contains--and why it might appeal to the casual TV audience in the same way that the Michonne one-shot that came out the week before the season premiere did.

That rather unique wall that the Governor of Woodbury had in his mancave? That's some pretty messed-up stuff, right? But a guy like that, he's got to have killed or been responsible for the deaths of many more walkers and even people than just what we saw there. So what made those particular heads jar-worthy? And what the heck would motivate someone to keep a bunch of heads in aquariums to begin with?

That's the premise for the story in the Liberty Annual.

The Governor seemed a fairly straightforward character during his initial run in Robert Kirkman and Charlie Adlard's The Walking Dead, but he's since become far more layered, to no small degree because he's been the subject of a pair of prequel novels that cast the character, if not as the hero, then at least as the lead. The Walking Dead; Rise of the Governor and The Walking Dead: Road to Woodbury seemed like crass cash-ins on the popularity of the character, but have proven to be a compelling character study, and a great opportunity for Kirkman and his co-writer Jay Bonansinga to do stories set in the world of the comics, but without being encumbered by a timeline.

The Walking Dead: The Governor's Man Cave Explained in a Comic Tomorrow