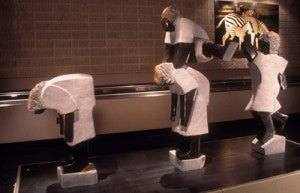 Does Andrew Lincoln, who hails from the United Kingdom, have a favorite statue at the Atlanta Airport?

It's not clear--but his character on AMC's The Walking Dead, Rick Grimes, does according to tonight's episode, "30 Days Without An Accident."

The sculpture seen at left was the one he described in the episode--a marble (and other stones) statue of kids playing leapfrog.

It's part of a permanent installation aimed at bringing art to airports around the U.S., and was installed in 2001, according to the Airport's website. Here's how they describe the installation:

This permanent collection of twenty contemporary stone sculptures from Zimbabwe debuted in 2001 and is one of the largest publicly owned and exhibited collections of its kind. Located in the pedestrian corridor of the Transportation Mall between the T Gates and Concourse A, it features twelve of Zimbabwe's top artists. Though the Art Program chose these sculptures for their intrinsic beauty, the themes explored by the artists also seem universal. The works delve into the importance of family, humanity's relationship with nature and desire to be spiritually connected. The Art Program hopes that these common themes resonate with passengers of all backgrounds.

To create each piece the talented Zimbabwean artists skillfully hand-carved the stone to rough out the initial form without the use of power tools. Next the artists smoothed out select surfaces with sandpaper. Wax was applied to some of the surfaces to create contrasting textures that enhance the work's beauty and emotive qualities.

Not only is The Walking Dead filmed in Georgia, but we know (both from previous seasons and especially from this week's episode, which featured Macon, GA in close proximity to the prison on a map) that it takes place there, meaning that when a local like Rick talks about "the airport," he'd be talking about Atlanta's.

It's interesting that this is a real sculpture because there was something in Lincoln's delivery of the line that made us think for a moment that he was laying a trap--that he would know this woman was lying because he had made up a statue to see her reaction, and she agreed so quickly. The quiet, contemplative look he gave the camera after she acknowledged his comment about the statue gave us that impression, anyway, which is why we went looking for it.

The Walking Dead: The Sculpture Rick Describes Is Real

Are PlayStation Plus Prices Increasing?