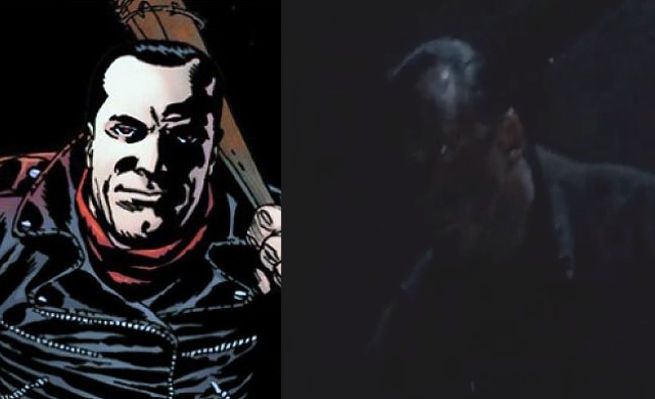 Spoiler Warning: If you have not watched The Walking Dead Season 5 premiere, then be warned that this article contains a description of one of the scenes in the episode.

There’s a big question on the minds of The Walking Dead fans after The Walking Dead Season 5 premiere. At the very end of the episode, there is a flashback scene, which shows Gareth and his group locked up in a train car.

There is a group of men that comes in and takes one of the women. One of the men has slicked-back black hair. When Gareth tried to reassure his mom that everything’s ok, the black-haired man bends down and says, “No, it’s not.”

The black-haired man bears somewhat of a resemblance to the comics character Negan, which had many fans questioning on social media if Negan might have been introduced at the end of the episode.

However, the man was not Negan. On twitter, Walking Dead creator Robert Kirkman offered the following clarification, “That was NOT Negan at the end of the episode. Note the face tattoos.”

On the Talking Dead, Walking Dead special effects guru offered some further details on the man in the train car at the end. Nicotero said, “He’s the guy that they let out of the train car when Glenn says, ‘That’s still who we are. We have to still let those people out.’ That’s the same guy that we see in the flashback at the end. And so he’s part of the group that followed the signs to Terminus and took it over.”

Was That Negan On The Walking Dead Season 5 Premiere?