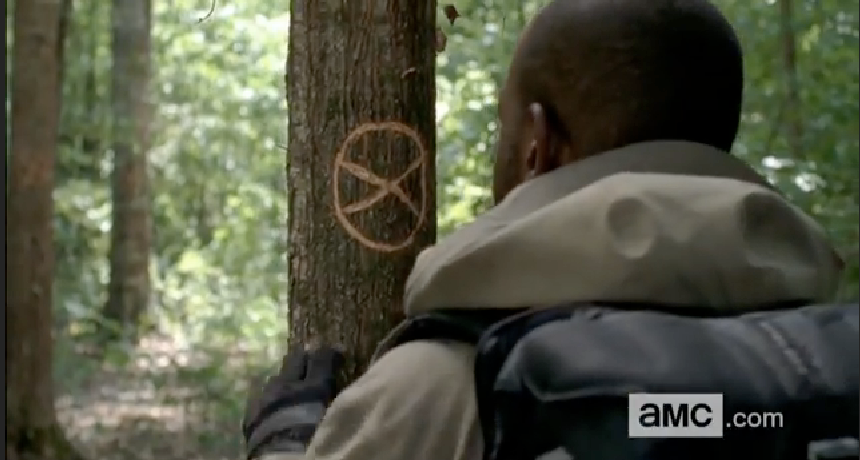 As The Walking Dead's fifth season premiere came to a close, viewers discovered that Morgan, one of the series' longest-surviving characters, is still alive and kicking.

Walking down the same road that Rick once took, Morgan discovered a sign that used to say "Sanctuary," but was edited by Rick to read "No Sanctuary." Based off of the growth and decay surrounding the sign, it seems that Morgan is several weeks, or possibly a few months, behind Rick.

When Morgan heads further down that direction, he encountered a series of encircled X's etched onto trees. But what do these symbols mean? Their placement on a linear path of trees suggests a trail leading somewhere. While anyone could have left it, Rick, or Carl seem like the most obvious suspects.

But their reasons to do so seem shaky. It's not like Rick our Carl would have left the markings specifically for Morgan. They haven't interacted since Season Three, which would place Morgan far in the back of Rick's mind. The tree's markings do match what we saw on Morgan's map back in season Three, but they were supposed to denote safe zones. The symbols' placement behind a "No Sanctuary" sign would contradict their existence. And while Rick does have a history of leaving breadcrumbs for Morgan to follow, this particular play risks attracting unwanted attention. Rick should have learned by now that the only thing you can trust less than a Walker is, tragically, a human.

Perhaps Father Gabriel created a path to his church, or the mysterious tattooed man--who had a matching tattoo on his temple--left it behind for his own group of followers. Another theory making the rounds is that Tyreese's former hostage (whose body was never shown) left them behind, making a path for Gareth.

Then again, no one said these symbols had to be trail markers. They could be a secret code, or a set of instructions, for an entirely new group of characters. Carved-out symbols were often a way for migrants to communicate with one another back in the early 20th century. Different images would denote upcoming safety, danger, and other information that a homeless person may need to know.

Thankfully, answers shouldn't be too far away. In a interview with The Walker Stalkers, Season Five Premiere Director Greg Nicotero said the marks were "a piece of information that you will soon discover. Because of the time jump — you’ll find out in the next episode or two what the marks on the tree are, but you don’t know yet.”

What do you think the symbols mean? Check out the scene one more time and let us know in the comments.

The Walking Dead airs on Sundays at 9 PM ET on AMC.

The Walking Dead: What Are The Marks On The Trees?