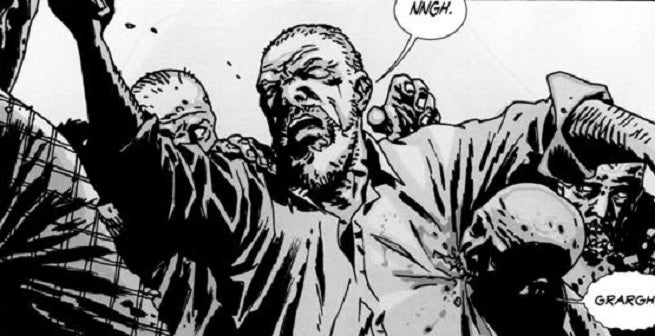 On the preview for next week's episode of The Walking Dead screened tonight during AMC's Talking Dead, Rick Grimes and company get their first look inside the walls of the Alexandria Safe-Zone...and, among other things, are told that they should talk to Deanna.

Of course, for comic book fans who have felt pretty smug and secure in their knowledge of what's coming next, that has thrown some people -- since there's Deanna in the comics.

In Alexandria, there's a woman named Denise, who is a doctor and a minor character, but it seems unlikely that's who they're talking about, especially since the Alexandria scouts mention a male doctor surviving in the community to Noah at an earlier point in the episode.

Because she's spoken of as the authority on Alexandria, a popular theory both among our writers and on Reddit already is that Deanna may be Douglas Monroe, a former Congressman who was the leader of Alexandria when Rick and company came along.

If that turns out to be the case, the biggest element of Douglas' story that would be altered by a gender swap...already has. That is, there was a minor story where he started targeting Andrea to be one of his girlfriends. That Andrea herself, who still lives on in the comics, has already been gone for the better part of two seasons suggests that even if Paul remains Paul, they'd have to tweak that story somewhat.

It could also lead to some interestingly-different scenes in that Douglas and Rick frequently sparred in Rick's earliest days at the Safe-Zone, with the two essentially fighting over who got to be top dog since their leadership styles and philosophies differed wildly. Replacing Douglas with a woman would take away the "alpha male pissing match" element of those conversations and move it toward a dynamic we don't see on TV as much.

The Walking Dead: Who Is Deanna?