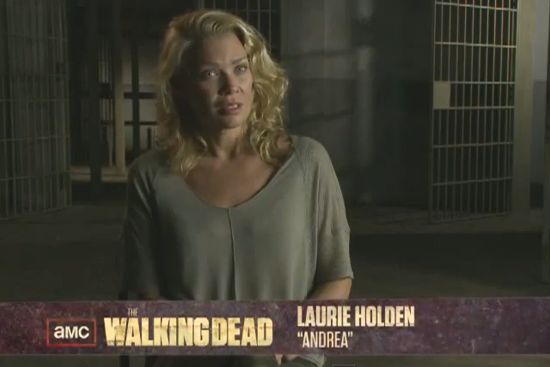 One of the biggest questions of season 3 has been which side of the fence Andrea is on. While she started out with Rick’s group, she seems to have adapted very well to life in Woodbury. In the “Made to Suffer” episode, Andrea both saved The Governor, and she also let Michonne go. While she fought on the side of Woodbury against Rick’s group, she didn’t realize she was fighting Rick’s group, because all she saw was Oscar in prison garb.

In previews for “The Suicide King” episode of The Walking Dead, Andrea appears to be caught in the middle between the two groups with neither side trusting her completely. When she goes to visit the prison with a zombie in tow, Rick Grimes very cautiously keeps a gun on her. The Governor also can be heard saying he’s not sure where Andrea's loyalties lie.

While fans have come to view Andrea as a character who has made bad decisions on the show, having slept with both Shane and The Governor, Laurie Holden, who plays Andrea, has dropped a spoiler that better days might be ahead for the character. In a looking ahead video, Holden says, “Just because one man falls, doesn’t mean everybody else has to. She’s going to persevere. I want her to fight for the people and feel even more inspired and empowered to do the right thing.”

The Walking Dead: Will Andrea Be Inspired To Do The Right Thing?