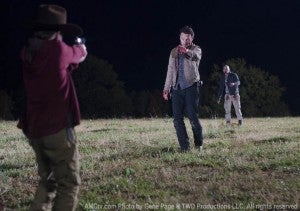 Tonight's episode of The Walking Dead was the kind of anarchic, no-holds-barred bloodbath that's usually reserved for season--or at least mid-season--finales. With three warm-blooded casualties and most zombies blasted, stabbed and otherwise mangled than most viewers could hope to count, it's certainly clear that a lot has changed since last season and its derisive media shorthand "The Talking Dead."

They managed to pull it all off with a surprising amount of character development, though--something that the show hasn't always been able to do successfully during the big action moments.

T-Dog, for example, probably had roughly as many lines in this episode as he's had in the entire series to date. When Michael Rooker counted up the seven and a half minutes of Merle's total onscreen time prior to the third season, most fans probably thought, "I wonder if you could do that with T-Dog!" Yet, we got some insight into his character and his motivations before he was allowed to die a hero's death.

Lori had the same thing; while her monologue was a bit strained, and a bit much, it was understandable. Facing the worst possible situation, she elected to die in order to save her unborn child--and forced her other child, one who knew her and loved her, to watch and assist.

Of course, there will be those who argue that she didn't have much choice. Had the baby died during childbirth, she could potentially have had a zombie living inside of her, and that likely would have ended badly for all involved. But I digress.

Her speech will likely do something to salvage her tarnished image with the fans; the din of "let Lori die! Let Carl die!" can be heard on Twitter and around the Internet after nearly every episode of the show--but it seems unlikely there will be a whole lot of celebrating today. Her death was heartbreaking, and what it meant for Carl even more so. 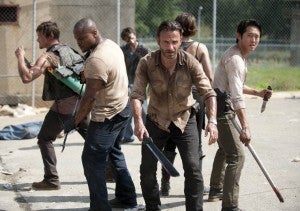 All of this begs the question, though: Now that Rick has told the group that it doesn't matter how you die, will we ever see another "zombified" version of one of our beloved survivors? The image of Jon Bernthal's Shane rising from the ground to chase Rick is an iconic one in the series, but it almost seems as though we may not get that again.

T-Dog is, of course, an interesting case. While most people, once bitten by a zombie, tend to reanimate after death, there are exceptions and in almost every zombie story you ever watch there will inevitably be that person or people who are eviscerated, chased down and consumed, etc. In theory, one assumes those people could reanimate, assuming their brains weren't eaten or damaged during the scuffle, but if they were to do so, they wouldn't be much of a threat to warm-blooded people walking around them. I mean, sure--Hershel got bit on the ankle by a desiccated lurker, but that's pretty rare, and we didn't really even get that great a look at the zombie.

Of course, T-Dog is just an example; we won't see him specifically reanimated for a couple of reasons: first of all, Rick and Daryl have been to the body. If there was any chance of reanimation, they would have put a stop to it and the fact that we didn't see it onscreen doesn't mean it didn't happen. Second, T-Dog and Carol made such a point of their "pact" and the fact that they don't want to be turned, that it would be traumatic for viewers to see them turned--and unless it serves some big story point, like Carol turning up as a walker and killing another survivor or something, it's hard to imagine they'd do it.

It seems likely that, eventually, the answer will be yes. Even if there's nothing planned for now, and even if it seems hard to pull off with everyone around that person understanding the impact of not destroying their brain, we'll eventually see somebody who hides their injury, or whose family hides their injury, or who simply walks offscreen and returns as a walker, like Sophia.

It would have to work that way, though, in order to have any real impact. Sophia remains the most earth-shattering reveal of the series to date, even if the episode in which she was revealed to be infected was nowhere near as insane as this week's gorefest. In order to really blow the minds of the viewers, you'd have to have something on that order of magnitude or higher.

Good luck with that.

The Walking Dead: Will We See Any More Zombified Survivors?

Ant-Man Is Available Now in Fortnite