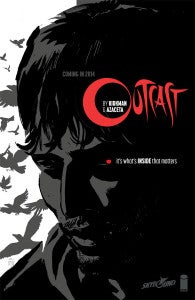 The upcoming Image Comics/Skybound horror comic from The Walking Dead creator Robert Kirkman and artist Paul Azaceta has been revealed.

Titled Outcast, the series is already in development as a TV series. The lead of the series, according to Kirkman's comments in a conference call with the press, is Kyle Barnes, who "has been plagued by demonic possessions his entire life, and he's decided that he's going to dive deeper into what's been occurring to him...and try to figure out what it is he's been experiencing."

The series, Kirkman's first monthly horror launch since The Walking Dead, is being developed for TV at Fox International Channels.

“Sharon Tal Yguado and the entire team at FOX International Channels have been instrumental in making The Walking Dead the worldwide success that it has become," Kirkman said when the show was announced. "I couldn’t resist the opportunity to continue working with this forward-thinking and extremely talented group.”

“Exorcism has captivated movie audiences all over the world but has never been explored on television,” said Sharon Tal Yguado, EVP Global Scripted Programming and Original Development at FIC. “Robert Kirkman, who forever changed the scope of Cable TV with The Walking Dead, possesses an unparalleled talent of telling big concept stories in a smart and incredibly genuine way. We couldn’t be more excited to be working with him on this project, which we see as a reinvention of the genre.”

Today, Kirkman told reporters that he believes the exorcism genre is much more open to reinterpretation than zombies, of which audiences have certain expectations.

"It's going to be a big story – very epic – and we're going to meet a lot of characters along the way and probably lose a few of them," Kirkman said. "There probably won't be as much of a blood bath as 'Walking Dead'...but when you're doing an independent comic and can do whatever you want, it's fun to keep people guessing."