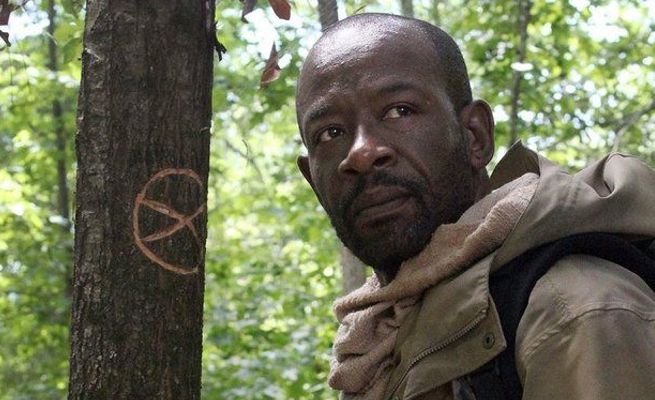 During a newly-released postgame interview with Entertainment Weekly, Lennie James of The Walking Dead discussed what it is that led Morgan to that spot in the woods where he started the episode last night...and how he got to be so zen about things when the last time we saw him, things were pretty bleak.

"I can tell you that much like the transformation from the first pilot episode to 'Clear' where there was an incident in the sense that Morgan lost his wife and his son—and we saw the affect that had on him in 'Clear'—an incident has happened to Morgan again," James said. "He has come across someone who has kind of led him and redirected him to another path. And what we’ve met in the finale of season 5 and we may well witness is season 6 is the result of that incident. I hope that makes sense. I am desperately trying not to say things that A) I don’t know about it, and B) What little I do know, I’m not allowed to say."

James will appear in the Season Six premiere of The Walking Dead but says after that, he's "at the mercy of the show."

The Walking Dead returns in October. Fear The Walking Dead, a companion series set in the early days of the zombie apocalypse in Los Angeles, will premiere over the summer.

The Walking Dead's Lennie James Answers: What Happened to Morgan? (Kind Of)

Attack on Titan Fan Recreates Shiganshina to Scale in Minecraft