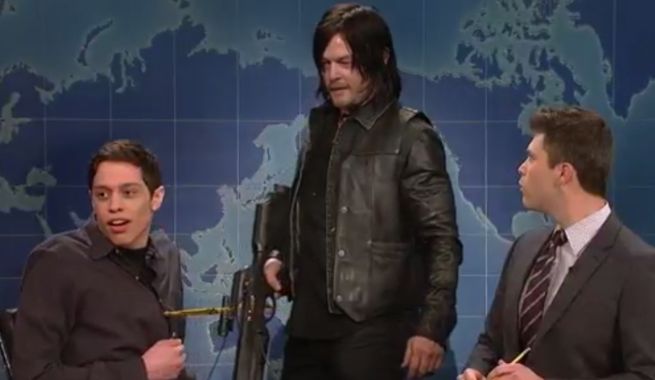 On tonight's Saturday Night Live, The Walking Dead's Norman Reedus made a surprise guest appearance. In the past, Reedus has repeatedly professed to being a big fan on SNL.

During SNL Weekend Update, Pete Davidson suddenly got shot in the chest with an arrow. Then, Norman Reedus came strolling out in character as Daryl Dixon with his crossbow in tow. Reedus told SNL anchor Colin Jost that he needed to be careful that Davidson was about to go for his throat.

However, Jost pointed out to Reedus that Davidson was not a zombie. A surprised Reedus questioned Davidson's complexion and how he was slow moving. Davidson explained that it was just good weed. Watch the clip embedded below.

Update: The full SNL Weekend Update sketch about The Walking Dead has now been officially released online, which we've embedded below.

The Walking Dead airs on Sunday nights on AMC, but the show is currently on hiatus between seasons.

Star Wars: Ahmed Best Is Down to Return as Jar Jar Binks

Free Xbox, PlayStation, and PC Games to Play This Weekend