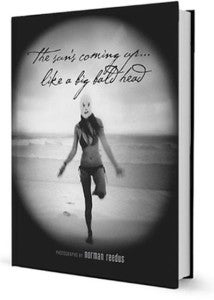 Norman Reedus, who plays Daryl Dixon on The Walking Dead, has just released a new photo book for pre-order. In addition to being an actor, Reedus is also an accomplished photographer.

The Sun’s Coming Up… Like A Big Bald Head is a limited-edition collector’s volume of photographs by Norman Reedus. According to the description on Reedus’ website, “This provocative collection redefines our daily encounters. Through his penetrating imagery, Reedus takes us on what proves to be a hauntingly intimate journey through the dark and sublime.”

Reedus’ Walking Dead co-star Andrew Lincoln also had some nice things to say about the photo book. Andrew Lincoln said, “Every photograph is in some way autobiographical, as its composition and content all depend on the eye and the mind of the taker. But I would suggest not attempting this with these images.

I first met Norman on a blistering hot Georgia day four years ago. I have been trying to pin him down ever since and he has constantly eluded me. He is one of those rare human beings (if indeed he is one), that continues to surprise you the more you get to know him.

These photos are capricious. One moment brutal, the next beautiful, sexual, and vulnerable in equal measure. In the blink of an eye, innocence turns to experience and everywhere there are masks…Some of the most liberating and exuberant photos involve masks. But my favourite images are playful and bewitching.

I had never met a Norman until Mr. Reedus appeared in my zombie apocalypse. He was my first Norman after 39 years on this planet. And so, as Barry White so eloquently put it…Norman is, ‘my first, my last, my everything.’”

The Sun’s Coming Up… Like A Big Bald Head is currently available for pre-order on Norman Reedus' website, and the book is scheduled to ship by October 31st.