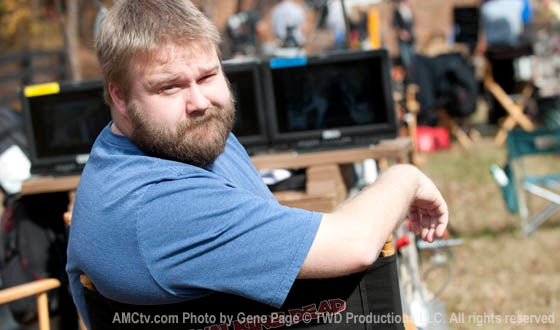 Note: The video embedded below appears not to be working, so feel free to click on the link in the first paragraph to see the video.

In an exclusive video available on a Brazilian entertainment site, The Walking Dead creator and executive producer Robert Kirkman discusses the differences between the comics and television series, from a special feature that you'll be able to see on next week's The Walking Dead Season Two Blu-ray release.

"I really like screwing with the comic book readers to a certain extent," Kirkman says as the video begins. "I'm always the one in the writers' room going 'Let's introduce this beloved character from the comic in the opening scene of the episode and then let's kill him at the end of the episode'."

"One of the most important aspects of The Walking Dead that makes the book so successful, that keeps people coming back for more," Kirkman explains, "is the fact that you never know what's going to happen at any time. Anybody could die, anyone could leave, new people come in--it's a very volatile comic and they never really expect what's coming."

He added that if they were to adapt the show directly from the comics without making changes, they would lose that effect, which he calls a "key component" of the series.

The writer concedes that "There are things that happen in the comic that you absolutely have to put in the show, otherwise you're not doing your comic justice--but maybe we move it up, maybe we move it back, we add other characters into the mix and we just do little adjustments to make it a little bit more compelling for the audience that's invested in the source material.

Check out all that and more in an interview visible below. The Walking Dead Season Two hits Blu-Ray on August 28.