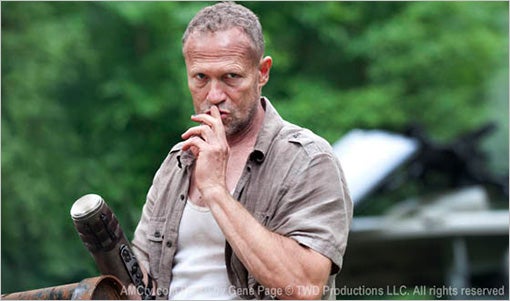 During an interview with Eric Ratcliffe's Why I Love Comics podcast earlier this week, The Walking Dead's Michael Rooker (Merle Dixon) talked a bit about his experiences so far this season, what his character might be up to as far as his relationship with Rick Grimes is concerned, and what fans should expect in Sunday's midseason finale, the last new episode of AMC's The Walking Dead until the show returns from its hiatus in February.

On Merle's feelings toward Rick:

"I think Merle over the span of what you saw with Andrea is getting information about this guy, Rick, being a very good leader. He's respected by his followers - so I think that Merle respects that to a certain degree but there's still history here and Merle is not one to forget, either. So we'll see how it ends up playing out later on in the season."

On returning to the series after a long absence:

"I think even when I wasn't on the show, my presence was felt. The writers kept adding in things about Merle--my brother rode my bike, my brother found my stash, my stash ended up saving T-Dog. The character was kind of there and so once I was brought back onto the show, you already had a little history about who Merle is and where he came from and what he liked - so I didn't have to do a lot of that."

On getting used to the prosthetic on his arm:

You know what, it didn't take hardly any time at all. I went through the whole process of developing it with the prosthetic people and testing it out and the only thing you have to get used to is the actual blade is about six inches--so realizing that's the case, your hand-eye coordination and your brain have to adjust to that different length for the one arm. But once that occurred (that didn't take long for me), you wear it a day or two and you're already using it as if it's your arm, as if it's your real extension.

On what to expect from this weekend's mid-season finale:

When it comes to Merle, what's coming up for Merle is more kick-ass. You're gonna get some surprises in there but I'm not going to tell you those surprises--you're going to have to watch for yourself, my friend. All I can say is the finale over the holidays is going to be probably one of, if not the best episodes of this first half of the season.

The Walking Dead's Rooker: Sunday's Is One of, Maybe The, Best Episode Yet This Year