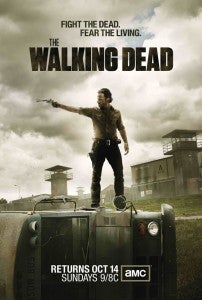 We've seen a couple of these posters, with the first of them rolling around the time of San Diego Comic-Con International and a lot of promotional material hitting recently--but Yahoo! Movies has a first look at a number of character profile photos, seen below along with the three already-released pieces of art that appear to constitute the key art for the upcoming third season of AMC's The Walking Dead.

The photos feature Michonne and her zombie companions; Rick and Carl; The Governor; Daryl Dixon; and Glenn and Beth. Check them out below.

The Walking Dead returns on October 14.