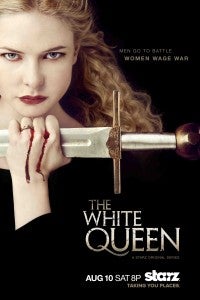 While it's been airing in the U.K. for a while, American audiences have yet to see anything out of The White Queen, the miniseries adaptation of Philippa Gregory's novel of the same name. The video embedded below will help you with some of that. The novel tells the story of Elizabeth Woodville, queen consort of King Edward IV of England, as she and two other women vie to be the Queen of England. The series recently debuted on the BBC to mediocre critical response but was popular with audiences. You can check out the trailer below; the series will debut in the U.S. on Starz on August 10.