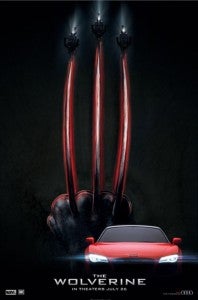 While superhero movies rule the box office, they also have become champions of promotional partnerships. 20th Century Fox and Audi USA have teamed up to create original promotional content for The Wolverine.

The content inspired by The Wolverine stars the Audi 2014 R8 V10 Spyder and the Ducati Diavel Cromo motorcycle. The pieces, captured by a Canon EOS C300 digital camera at the Tango Row air strip at San Bernadino International Airport in California, promote the integration of the Audi brand in a uniquely artistic manner. The visual style blends the high-powered nature of the Audi R8 and the Ducati Diavel Cromo with the aggressive aesthetic of The Wolverine. The content uses long exposures of the iconic headlights and tail lights of the vehicles to create a “light painting” of Wolverine's Adamantium claws, using a combination of live action and computer-generated imagery (CGI).

The campaign was inspired by Audi’s role in the movie and its joint activity with 20th Century Fox. The Wolverine is scheduled to be released in movie theaters on July 26, 2013.

The Wolverine Teams Up With Audi For Promotional Content