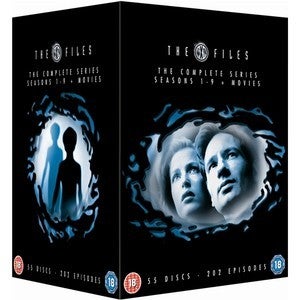 As part of Amazon's popular Gold Box Deal of the Day program, in which they hand-pick a few popular items for steep, 24-hour discounts, the online retailer is offering more than 70% off of The X-Files: The Complete Series and Movies, including all nine seasons of the hit sci-fi series and both movies--The X-Files: Fight the Future and The X-Files: I Want to Believe. The result is that the box set, usually around $250, is less than $90 for today only and given the recent popularity of The X-Files: Season Ten from IDW Publishing and Great Pacific writer Joe Harris, it seemed an appropriate time to share it. You can check out the specifications and bonus features and buy it here. Disclaimer: No, this is not a paid advertisement, although if you buy it from there it will go through this reporter's affiliate storefront. The series is available in a new box set for the first time in years, with some of the old flaws in the discs reportedly remastered out and slightly different packaging. The series has enjoyed a surge in sales and popularity this year as part of its 20th Anniversary tour.

The X-Files: The Complete Series & Movies Is Dirt Cheap Today

Avatar: Future Sequels Will See the Na'vi Coming to Earth

Steam Makes One of 2011's Best Games Free for Some Users