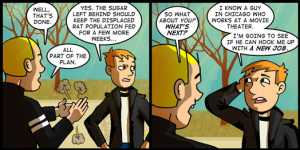 In the latest edition of his popular, hilarious (and sadly concluding) webcomic Theater Hopper, Tom Brazelton made an interesting and unexpected announcement: Jimmy and Charlie, two of his regular characters, will be moving to Gordon McAlpin's Multiplex rather than retiring when Theater Hopper comes to an end. Of course, in the world of mainstream, corporate comics, it's not uncommon for characters whose book has just been canceled to appear, or even become part of the regular supporting cast, in another title. It helps keep the intellectual property's value up and keeps the character "warm" in case the publisher gets the itch to take another swing at giving them their own story. It's obviously far less common in smaller works, where the characters don't necessarily have a ton of built-in intellectual property "value." And it's even more unusual in creator-owned works, where the characters will be jumping from one comic to another, where the top-line properties aren't even owned by the same people. Brazelton addressed this in the blog post that ran with the comic, which we've excerpted below but can be read in its totality at the link above.

While this comic marks the LAST APPEARANCE of Jimmy and Charlie in Theater Hopper, it does NOT mark their last appearance in webcomics. Jimmy and Charlie are moving to Multiplex. I talked with Multiplex creator Gordon McAlpin several months ago. I followed up with him last week to see if he still might be interested in adopting Jimmy and Charlie once Theater Hopper ended. Not to pat myself on the back too hard, but I like this idea of handing Jimmy and Charlie over to Gordon for use in Multiplex for several reasons. First of all, Gordon's a hell of a writer and relationships are his specialty. Jimmy and Charlie have a rich background - one I invested a lot of time into. Their lengthy back story was not something I had really tried before as a writer. Turning these characters over to a writer as competent as Gordon ensures their story will continue in some form. I also like the idea because - from what I've gathered - it's somewhat unprecedented. Now, web comics as a genre run pretty far and wide. So I could be completely off-base, but I've never heard of one creator handing over a set of characters to another creator like this. Sure, characters change hands between writers and artists all the time. But usually they stay confined within the universe they were created in. How often has it occurred that a creator establishes characters in one universe and hands them over to a creator with their own established universe? It would be like Marvel turning to DC Comics and saying "Here. You can have Spider-Man from now on. Have fun with him!" I don't know. I could be completely wrong. If I am, I take it all back. I didn't intend to offend. But I haven't come across it in the last 10 years I've made web comics. Lastly, the reason I like this idea is because it gives the people who supported Theater Hopper a place to land once the comic ends next week. My comic and Gordon's comic have always had a close affiliation. I'm certain there is a lot of overlap between our fans. But in case there isn't, Jimmy and Charlie showing up in Gordon's comic gives my fans a conduit through which to explore one hell of a great comic in Multiplex. If you like Theater Hopper, I know you'll find a lot to enjoy there. Whatever happens, I told Gordon he's free to do with the characters whatever he wants. If he decides to make Jimmy a serial killer and Charlie a lesbian, that's his choice. The characters are his now to do with as he pleases. I don't want Gordon to write the characters as I would have. I want to witness with everyone else the new places he takes them. I don't know for sure when Jimmy or Charlie will first appear in Multiplex, but Gordon indicated it would be sometime early next year - as soon as his current story line concludes. So help me keep an eye out for them, will you? If you could help spread the word about this comic, I would greatly appreciate it. I originally intended to upload it last Friday. But a blizzard that whipped through town last Wednesday left our home without power for over 24 hours. We were kind of scrambling to get things back together on the homefront and the Friday update didn't happen. A change like this is a blockbuster and I'm worried that not a lot of people are going to see it due to the holiday. If you're reading this right now, MAKE SURE OTHERS SEE IT. Share it on Facebook or Twitter. Let your web comic reading friends know. Even if they don't read Theater Hopper or Multiplex, the might get a kick out of what we're doing. Who knows? I have another comic that I intend to work on and update for Christmas. We're doing another small leap forward in time so the comic I'm posting on Christmas actually takes place on Christmas. So be on the lookout for that. After the Christmas comic, there will be one more comic this week. After that, the VERY LAST THEATER HOPPER WILL BE PUBLISHED MONDAY, DECEMBER 31.